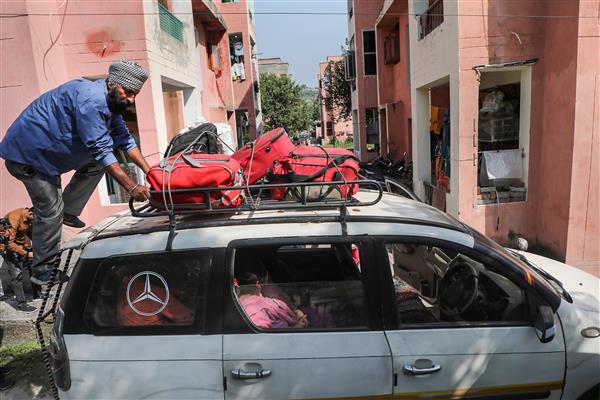 Pandits return to Jagti Camp in Jammu after targeted killings in Valley.

“It’s the fear of the unknown,” says 53-year-old minority community leader Sanjay Tickoo, holed up in a temple in the Ganpatyar area of Srinagar where a posse of CRPF personnel keep a vigil round the clock.

Tickoo, who heads the Kashmiri Pandit Sangharsh Samiti, had to take security cover after selective killings in the Valley last week, triggering fears of another exodus.

He had witnessed the large-scale exodus of his community members in 1990 but his family along with over 800 other families had decided to stay put. But the recent killings have shaken his confidence. “In these 30 years I may have felt little insecure but never ever have I felt that death is lurking around,” he told The Tribune.

Though the UT administration has assured enhanced security to the Pandit community, on the ground fear is all-pervasive. Lieutenant Governor Manoj Sinha has been assuring the community of adequate protection, but given the security scenario, the community seems sceptical.

After the 1990 exodus, 807 families had decided to stay back in the Valley. In the past few years due to the initiative taken by the Union Government which brought in employment packages for the minority community, some 4,000-odd Kashmir Pandits who had taken up government jobs had decided to return. Nearly 2,000 more were expected to join by November. But the recent killings have brought back the ghost of the 1990s.

For the first time since the 1990 exodus, seven of the 807 families have moved out after the recent killings. A majority of the 4,000-odd employees who had returned under the government’s rehabilitation package have also left. “Though they have left temporarily, clearly they were insecure by the latest killings,” commented Tickoo.

Alarmed by the sentiments prevailing among people, the UT administration has ordered those employees who fled to return and report for duty. “They have been asked to report back to duty in a fortnight. In any case they live in fortified security townships where there is no fear, and we have told them we will strengthen it further,” said a senior government official.

But the community seems shaken. “They are still trying to ascertain who killed Makhan Lal Bindroo or for that matter the teachers. And they themselves say minorities could be targeted as part of a design. In such a scenario, how can they assure us of our safety,” questioned a government teacher who shifted to Jammu two days back.

Though the security establishment claims to be hot on the trail of the killers, but community members say it’s going to take much more than just anti-militancy operations to restore their confidence.

They have been asked to report back in a fortnight. They live in fortified townships. We have told them we will further strengthen the security. Senior official

Though the security establishment claims to be on the trail of killers, the community members say it will take much more than anti-militancy ops to restore confidence