'Congress drifting into abyss by losing elections after elections' 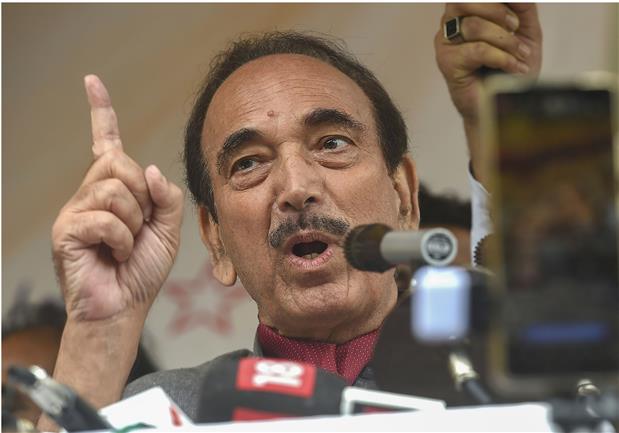 Ghulam Nabi Azad, who resigned from the Congress after 50 years, on Sunday said the abrogated Article 370, which provided special constitutional safeguards to the people of Jammu and Kashmir, won’t be restored.

In his first public meeting in Kashmir after resigning from the Congress last month, Azad blamed regional parties for misleading people through their emotive speeches over the restoration of Article 370 and its corollary Article 35-A, which provided constitutional safeguards and defined citizenship of the people of J&K. “For votes, I will not mislead and exploit you. Please don’t rake up issues which can’t be achieved. Article 370 can’t be restored. It needs a two-thirds majority in Parliament,” Azad said during his rally in Baramulla. At least eight councillors of Baramulla resigned from the Apni Party and joined Azad.

Azad said the Congress was drifting into an abyss by losing elections after elections, adding that there was no political party in India which could get a majority in Parliament and restore Article 370.

Azad said he would launch his party in J&K in the next 10 days to fight against “politics of exploitation and falsehood”. Azad’s stand on Article 370 is in line with newly created political entities in Kashmir but in contrast to the People’s Alliance for Gupkar Declaration (PAGD), which is seeking restoration of the special status of J&K.

“It’s another deception to provoke people for agitation and get them killed. So long as I am alive, I will fight against falsehood. You will have to kill me if you want to silence this idea,” said Azad.

Azad said he would rather fight for the restoration of statehood and protection of jobs and land of residents of Jammu and Kashmir.