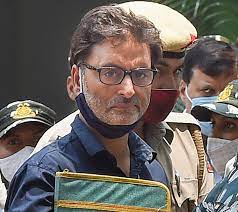 Kashmiri separatist leader Yasin Malik, who was on hunger strike in Tihar Jail for the last 10 days, discontinued his fasting on Monday evening after he was informed that his demands have been conveyed to the authorities concerned, prison officials said.

Malik began an indefinite hunger strike on July 22 after the Centre did not respond to his plea that he be allowed to physically appear in a Jammu court hearing the Rubaiya Sayeed abduction case in which he is an accused. The 56-year-old chief of the banned Jammu and Kashmir Liberation Front (JKLF) is serving a life sentence in a terror-funding case.