He is also facing trial in abduction case of Rubaiya Sayeed, daughter of the then Union home minister Mufti Sayeed in 1989, and an attack by JKLF militants on IAF personnel in Srinagar that left four dead in 1990 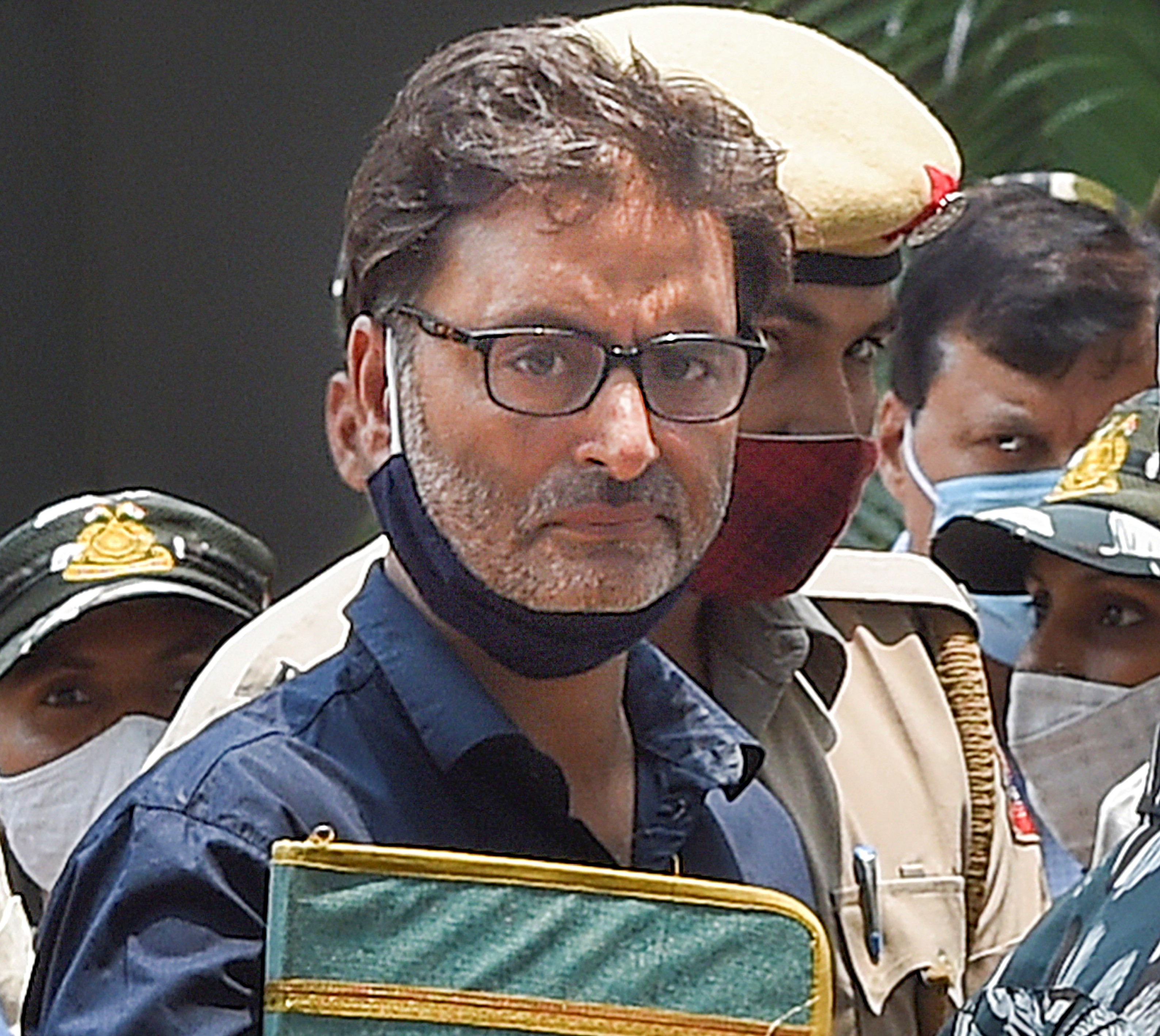 From a Pakistan-trained militant to one of the prominent separatist faces in Kashmir, life has come a full circle for chief of the banned Jammu and Kashmir Liberation Front (JKLF) Yasin Malik who was in limelight for varied reasons over the past three decades of turmoil in the erstwhile restive border state.

The 56-year-old Malik, who has been sentenced to a life term by an NIA court here, has been in and out of jail several times dating back to his student activism days before the onset of militancy in 1990.

Having renounced the path of violence and donned the political cloak in 1994, Malik, who is married to a Pakistani artist and has a 10-year-old daughter, had announced Gandhian way of protest after his release and was perceived to be a moderate voice in the separatist camp.

He was arrested in early 2019 in connection with a 2017 terror-funding case registered by National Investigation Agency (NIA).

Born on April 3, 1966 in Maisuma locality in the heart of Srinagar, Malik is also facing trial in the much-publicised abduction case of Rubaiya Sayeed, daughter of the then Union home minister Mufti Mohammad Sayeed in 1989, and an attack by JKLF militants on IAF personnel in Srinagar that left four dead and many others injured in 1990.

Malik started his anti-national activities at a very young age in 1980s when he formed Tala party which was involved in an attempt to disrupt the 1983 cricket match between India and West Indies in the Sher-e-Kashmir Stadium in Srinagar besides staging a protest against the hanging of JKLF founder Mohammad Maqbool Bhat in Delhi’s Tihar Jail on February 11, 1984.

After undergoing detention for months together on different occasions, Malik’s activities increased after his Tala party was renamed as Islamic Students League (ISL) that campaigned vigorously for Muslim United Front (MUF) candidates in the 1987 assembly elections.

The MUF candidates, including Mohammad Yousuf Shah, lost the elections amid allegations of mass rigging. Shah alias Syed Sallahuddin is now the supreme commander of banned Hizbul Mujahideen based in Pakistan-occupied Kashmir (PoK).

Both Shah and Malik were prominent faces among many others arrested for several months in the aftermath of the elections without a formal charge.

After his release, Malik was among the first batch of youths who crossed the Line of Control (LoC) into PoK for arms training in 1988 to join JKLF.

Malik along with Hameed Sheikh, Ashfaq Wani and Javed Mir formed the core group of the JKLF. While Wani died in a gunfight with security forces in March 1990, Malik was captured in an injured condition in August 1990 and remained imprisoned till May 1994. Sheikh and six other JKLF militants were killed at Ali Kadal in downtown Srinagar on November 19, 1992, while Mir is now heading a separate faction of JKLF.

After his release on bail in May 1994, Malik declared an indefinite unilateral ceasefire to follow non-violent struggle for so-called “independence” of Jammu and Kashmir from both India and Pakistan.

Pakistan-based JKLF founder Amanullah Khan removed Malik as the president of the party in 1995. However, Malik in return expelled Khan from the chairmanship and enjoyed support from his party colleagues in Pakistan and abroad.

He joined as a member of the powerful executive body of Hurriyat Conference, an amalgam of various separatist organisations, which was formed in 1993 but adopted a neutral stance when the conglomerate split between hardliners and moderates in September 2003.

He married Mushaal Hussein Mullick, an alumnus of the London School of Economics (LSE), in 2009 and the couple has a 10-year-old daughter, Razia Sultana, who lives with her mother in Pakistan.

Malik had an opportunity to meet world leaders including former prime minister Manmohan Singh and former Pakistani president Pervez Musharraf and also visited the US for medical treatment in 2001.

His sharing a dais with banned Lashkar-e-Toiba chief Hafiz Muhammad Saeed at a protest in Islamabad in February 2013 against the hanging of Parliament attack convict Afzal Guru was widely condemned in India.

He was also part of separatist leaders who visited PoK aboard ‘Karvan-e-Aman’ (peace caravan), a bus service started as a confidence building measure between the two divided parts of India and Pakistan on April 7, 2005.

Malik, who actively campaigned for boycott of elections, was arrested in 1999 under Public Safety Act (PSA) and released in 2002.

He was also in limelight for a campaign by his group, known as ‘Safar-i-Azadi’ (journey of freedom), in 2007 to garner support for the right of self-determination for the people in Jammu and Kashmir.

7 hours ago
9
Punjab Assembly session: On the sidelines