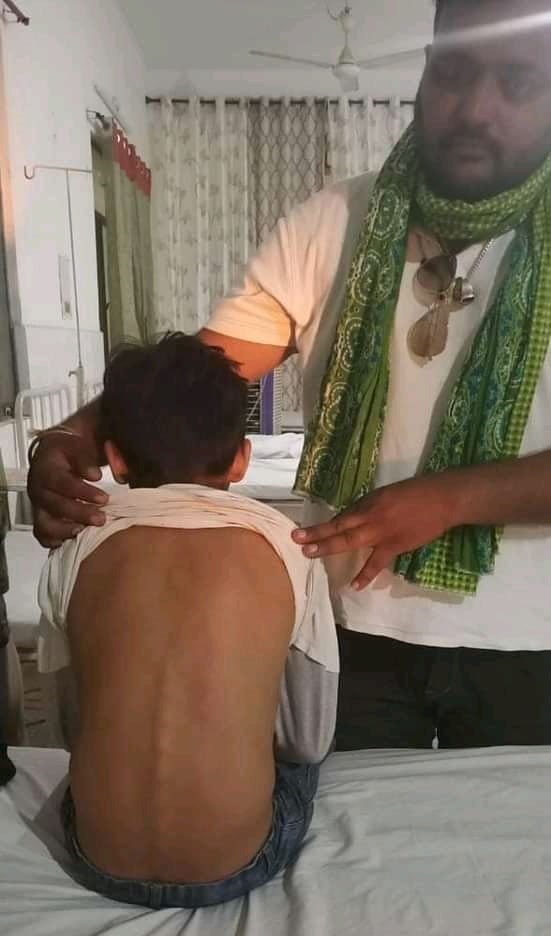 Father of Satwinder Singh shows his bruised back in Jalandhar on Monday.

A 12-year-old boy was held up and brutally beaten up by family members of another boy, a Class XII student, over a petty altercation. Though the incident happened on June 18, an FIR was registered in the case by the police on Sunday.

Satwinder Singh of Bir Bansiyan village in Phillaur was kidnapped and held up for hours at the house of his friend Karanveer, where the latter’s family tied him up and beat him up, punched and kicked him until members of Satwinder’s family came to his rescue.

A case under Sections 323, 341, 342, 506 and 34 of the IPC has been registered at the Goraya police station against Karanveer Singh, his brother Jasveer Singh, alias Jessi, his father Kuldeep Singh and mother Kulwinder Kaur, all residents of Bir Bansiyan village in Phillaur.

An FIR was registered on the complaint of Satwinder and his father Amandeep Singh’s at the Goraya police station here on Saturday.

In his statement to the police, Satwinder Singh (12), a Class IX student and resident of Bir Bansiyan village, said on June 18, he was playing with Karanveer Singh at Gurdwara Sahib Kalyan Ji in his village when they had a fight and Karanveer slapped him on his face.

Satwinder complained that after hititng him, Karanveer called up his mother Kulwinder Kaur on the phone. Fifteen minutes after the call, Kulwinder Kaur along with Karanveer’s brother Jessi, came to the gurdwara on a scooter and while abusing him, took him along on the scooter forcibly.

Satwinder said he also made an attempt to escape from them but they caught him again and took him to their house in the same village.

Satiwnder said he was taken into a room of their house where he was tied up with ropes by Kulwinder Kaur, Kuldeep Singh and Jessi.

Satwinder further said the four of them held his neck and beat him up, hit him with sticks on his thumb, shoulders, elbow, back, punched him, kicked him and hit on his ears with their slipper. He said he was punched on his right eye by Jessi following which he started crying loudly. Twelve-year-old Satwinder was held up in the room for nearly two hours — from 1.12 in the noon to 3 pm.

He said on hearing him cry, his grandmother Harbans Kaur, aunt Sarabjit Kaur, uncle Raghveer Singh came and freed him from the ropes. While the family of Karanveer fled from the spot, Satwinder was brought to his home from where he was taken to a hospital at Bundala by his father Amadeep Singh. Satwinder was sent to get an X-ray done at the Civil Hospital, Jalandhar, after which he is currently under treatment at the Bundala hospital.

As per the FIR, Satwinder received nine injuries from blunt weapons as per the doctor’s report. SHO, Goraya police station, Inspector Hardev Preet Singh said: “The boy’s claims were found to be true after the medical examination. A case has been registered against the family and teams are on the lookout for them.”