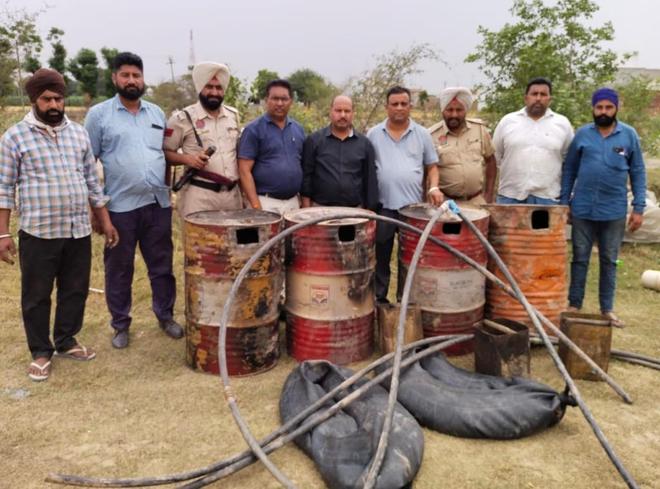 Continuing its drive against bootleggers and smugglers of liquor, specific teams of Jalandhar excise department raided various hideouts alongside river Sutlej on Thursday under Operation Red Rose. The teams destroyed 19,000 litres of lahan, besides recovery of 180 bottles of illicit liquor along with recovery of four iron drums, two rubber tubes, 19 plastic tarpaulin sheets, big iron drums and other utensils.

The department has got an FIR registered at police station Mehatpur under the Excise Act. On the direction of Assistant Commissioner Excise Jalandhar-II, a raid was conducted under Operation Red Rose in the Mand Area of Mehatpur village Veran, Dharme Dian Chhanna. Excise Officer Jalandhar West Harjot Singh Bedi said that adopting a tough stance under zero tolerance policy against the illicit liquor trade, a raid was conducted in the enclaves of river Satluj falling in the Mand areas.

Dr Harsimrat Grewal, Assistant Commissioner Excise Jalandhar-II, said that the drive would be carried out in future too. “Recently, we had destroyed 48,000 litres of lahan in a joint raid with Ludhiana team. It is in continuation of that raid. The Operation Red Rose has been going on since last year,” she said.

Last year too, officials of the Excise and Taxation Department had explained why such malpractices existed the most along the Sutlej. They had said the villages were situated far away from residential areas and there was an easy and free availability of water as well.