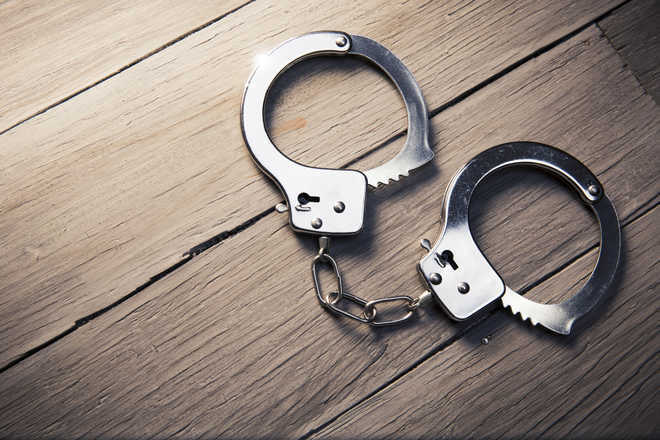 Hoshiarpur: The Tanda police have arrested two persons and seized a country-made pistol and eight bullets from their possession. The accused have been identified as Sarpargatjeet Singh, alias Japan, and Charanjit, alias Happy, both residents of Kadial colony, Civil Lines, Batala. The police had laid a naka at Miani turn on Sunday at 10 pm. Cops signalled an SUV to stop and during inspection of the vehicle, a country-made pistol and eight bullets of 8 mm were recovered from the two car occupants. An FIR under Sections 25-54-59 of the Arms Act has been registered against the duo. OC

Hoshiarpur: Hoshiarpur district has been ranked third in the National Means-cum-Merit Scholarship (NMMS) exam. Providing details, Gursharan Singh, District Education Officer, Secondary, said 159 students from the district had qualified for the scholarship, results of which were declared on Sunday. He said 2,210 students from the state had passed the scholarship examination. These students are entitled for a scholarship of Rs1,000 per month. He said to train the students for this exam, special teams were formed at district, block and school level. oc

Hoshiarpur: The Chabbewal police have registered a case against a youth for abducting a minor girl on the pretext of marriage. According to information, a worker of a brick kiln located in Jattpur village, told the police that his minor girl, who is a student of Class VII, was abducted by the accused, Bunty of Dhtana village in Muzaffarpur district, who was working in the kiln with him, by luring her of marriage. The police have registered an FIR. OC

One held with smuggled liquor

Hoshiarpur: The Hariana police have arrested a smuggler and seized 11 bottles of smuggled liquor from him. A patrolling party of the police had stopped a man while he was going from Dussehra ground side carrying a plastic bag at 11 pm last night. On search, 11 bottles of liquor which had a ‘For sale in Chandigarh UT only’ tag on it were recovered from him. The accused Bodh Raj of Mohalla Ranka, Hariana, has been booked under the Excise Act. OC