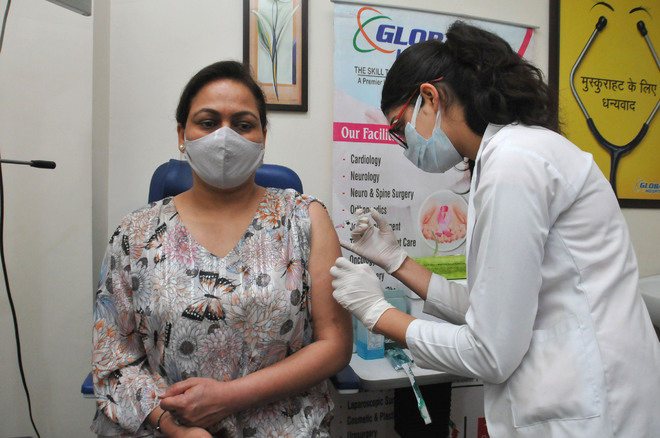 The district reported two more Covid-19 fatalities on Thursday, taking the death toll to 1,003, while 399 new cases pushed the infection count in the district to 35,426. Of these 399, as many as 40 belong to other districts, while 31,257 people have so far been discharged, there are 3,166 active cases in the district.

The vaccination drive in Jalandhar district is also going on at full pace. So far over 2.6 lakh Covishield vaccine doses have been administrated to beneficiaries. At the Civil Hospital centre as many as 140 people received the vaccines on Thursday. Elderly (for their second dose) and those over 45 years of age for their first dose continue to flock the centres for the vaccine. In many government and private centres vaccines are being administered.

The district reported nine more deaths due to Covid-19 on Thursday, taking the toll to 658. Besides, the district also witnessed 152 fresh cases taking the tally to 15,745.

Giving information about the cases, Civil Surgeon Dr Ranjit Singh said the number of active cases in the district stood at 981 and 15,394 patients had recovered from the virus.

Out of the total cases reported today, 14 were from Hoshiarpur city, 36 from other districts and the remaining were from various health blocks of the district. Four patients of the district died at the Hoshiarpur Civil Hospital, two at Jalandhar hospitals while three (one each) died at various hospitals in Chandigarh, Mohali and Amritsar.