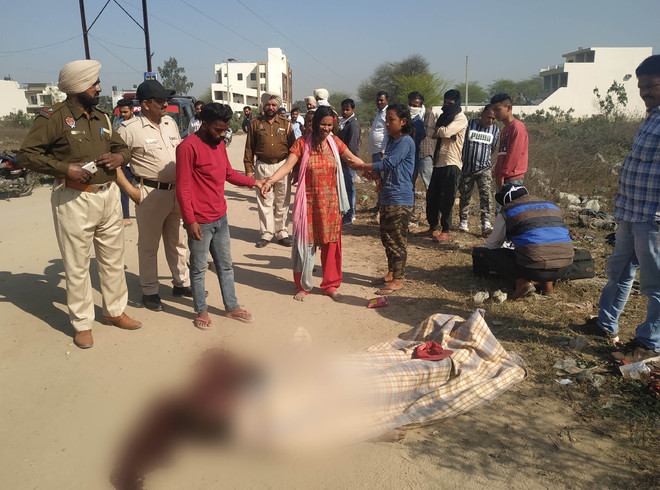 Kin of the youth, who was found murdered in Mansoorwal Dona village of Kapurthala, at the crime spot. Tribune Photo

A 20-year-old youth was found dead in a pool of blood with grievous injuries on the head and face near a private hospital at Mansoorwal Dona in Kapurthala on Wednesday.

The deceased has been identified as Deepu Sahu, a resident of Mangu Colony in Kapurthala. The 20-year-old, who repaired water filters for a living, had been out of his house for the last two days.

After reports of his death, the brother of the deceased lodged a complaint against unidentified persons at the city police station, Kapurthala. While a box of vermillion and a ‘mangalsootra’ (sacred thread won by married women) was found in the deceased’s pocket, the police say a love affair or the involvement of a woman cannot be ruled out.

An FIR was lodged under Section 302 of the IPC. As per reports, his father’s body was also found from the industrial area under mysterious circumstances two months ago.

DSP Kapurthala Surinder Singh said: “The deceased was a young man, a migrant, whose family settled in Punjab 30 to 35 years ago. He left home two days ago. His brother and mother lodged a complaint after his body was found. They said he had a clash with some persons a few days ago. The investigation is in its nascent stage. Several leads are being followed. There were very severe sharp weapon wounds on his head and face. With the things found in his pocket, the matter can also involve a woman. We are verifying and investigating.”