22-yr-old reunited with family after 7 years, thanks to CM Bhagwant Mann's swearing-in : The Tribune India

22-yr-old reunited with family after 7 years, thanks to CM Bhagwant Mann's swearing-in 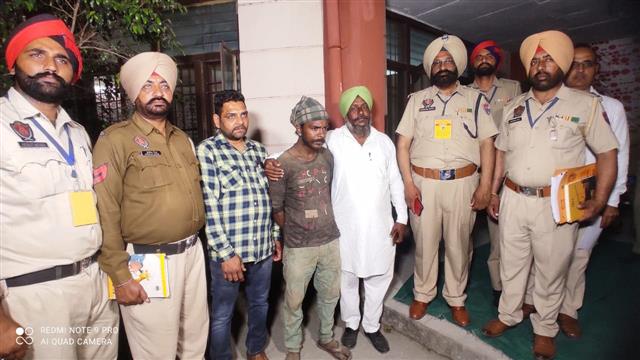 Faridkot boy with his family at Khatkar Kalan on Wednesday.

A child, who went missing from Sher Singh Wala village in Faridkot when he was 15- year-old, was traced in Khatkar Kalan on Tuesday and reunited with his family after seven years by the Nawanshahr police deployed in Khatkar Kalan, thanks to Bhagwant Mann’s swearing-in ceremony.

The police said it was an emotional reunion between the now 22-year-old Jaswinder Singh and his father as they reunited after seven long years of search and separation. They said the boy went missing in 2015 from Faridkot.

Talking to The Tribune, Lakhvir Singh, DSP Special Branch, Nawanshahr, informed that as special security arrangements were made in Khatkar Kalan owing to Bhagwant Mann’s swearing-in ceremony, the police was conducting verification of all the staff members involved in the preparations.

“The boy was working with a renowned tent house firm in Amritsar. His identity card was submitted in which his Faridkot address was mentioned. When the Faridkot police went to his house to verify his identity, the family members said the boy has been missing since 2015,” he said.

“On the directions of SSP Kanwardeep Kaur, we called Davinder Singh, father of Jaswinder Singh, to Khatkar Kalan to know what actually happened and how he went missing,” the DSP added.

Divulging more details, Lakhvir Singh said Jaswinder’s family told police that their son was passionate about joining the Indian Army. He used to go to the village playground along with other boys from the village to participate in running and other physical exercise sessions. However, on one odd day, he left his house in the morning to go to the playground, but never returned.

He further said the family had registered his missing complaint in Faridkot and at times, the police received information about him from other districts and even outside Punjab, but he couldn’t be traced. “The boy, for the initial years, was staying at Golden Temple and later, he got a job at a tent house firm,” the DSP added.

When questioned that despite having an identity card, why the boy didn’t try to contact his parents or go to Faridkot, DSP Lakhvir Singh replied that the family didn’t reveal much about this, but it is being assumed that the boy was upset or going through some tension.