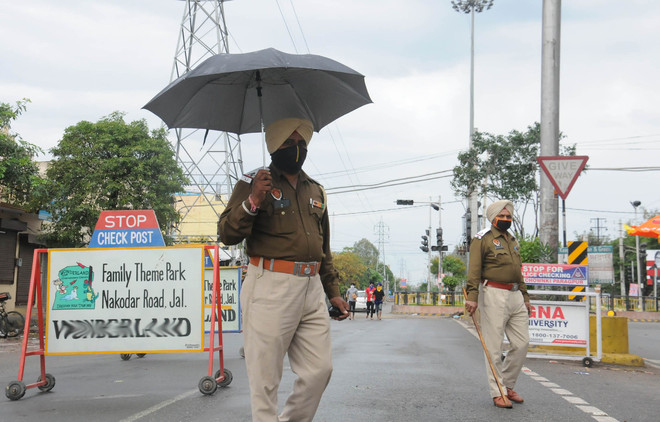 Policemen stand at a checkpoint in Jalandhar. Malkiat Singh

To tighten the noose around the curfew violators, the police have arrested 229 persons between March 23 and April 7.

Divulging the details, Commissioner of Police Gurpreet Singh Bhullar said apart from setting up checkposts, the police had been keeping a watch on the violators with the help of unmanned aerial vehicles (UAVs).

Bhullar said since the curfew was imposed, as many as 165 FIRs had been registered at various police stations that come under the Commissionerate Police. He said 3,147 challans had been issued and 302 vehicles had been impounded.

He added that the curfew was imposed to contain the spread of Covid and strict action would be initiated against the violators till it was lifted.

“A viable mechanism has also been put in place for the elaborate security arrangements. Sectoral police officers have been deployed,” said Bhullar, who categorically mentioned that no one would be allowed to violate the law,” Bhullar said.

Nakodar: The police have arrested nine persons for violating the curfew orders in the past 24 hours.

Nakodar Assistant Superintendent of Police Vatsala Gupta said the Nakodar sadar police arrested a person in this regard on Monday. Meanwhile, the Nurmahal police arrested three persons for defying the curfew orders as they were loitering.

She said no one would be allowed to defy the restrictions. The police officer said cases under various sections of the IPC and the Disaster Management Act had been registered against the suspects. Later, they were released on bail. She said a number of two-wheelers had been impounded. Besides, challans had been issued to violators.