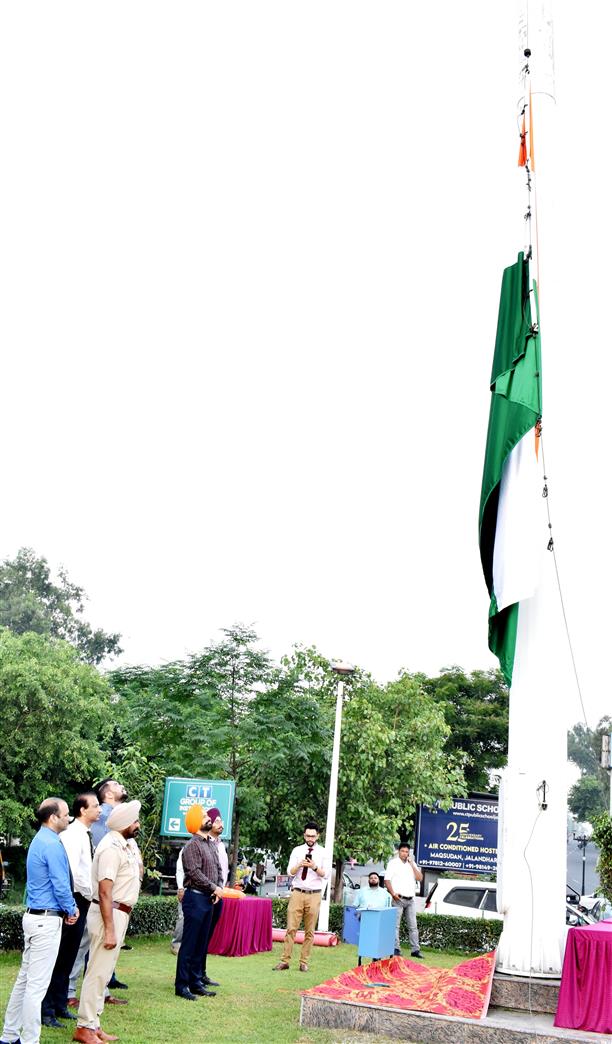 A national flag being hoisted at Maqsudan bypass on the Jalandhar-Amritsar National Highway on Wednesday. Tribune photo

A national flag was hoisted at Maqsudan bypass on the Jalandhar-Amritsar National Highway at a height of 30 metres in presence of Deputy Commissioner Jaspreet Singh on Wednesday.

As a part of ‘Azadi Ka Amrit Mahotsav’ events in association with the CT Group, the Tricolor was hoisted in a simple ceremony. This flag would be seen by lakhs of commuters passing through both sides of the national highway, which would instill a sense of nationalism and patriotism among them as we are celebrating the 75th anniversary of Independence, said Jaspreet Singh. The height of the pole erected for hoisting the national flag is around 100 feet.

The Deputy Commissioner exhorted the youngsters to tread the path shown by our great martyrs so that their dreams could be realised. He said all of us were enjoying the fruits of Independence just because of the sacrifices made by our martyrs. He also gave a call to youngsters for their constructive contribution in the overall development of the country. The students of CT Public School were holding banners spreading awareness against the single-use plastic and ‘Azadi Ka Amrit Mahotsav’. The event concluded with the recitation of the national anthem.

Others who were also present on the occasion included CT Group MD Manbir Singh, vice-chairman Harpreet Singh, Naib Tehsildar Mandeep Singh and others.