339 get placement letters in Hoshiarpur 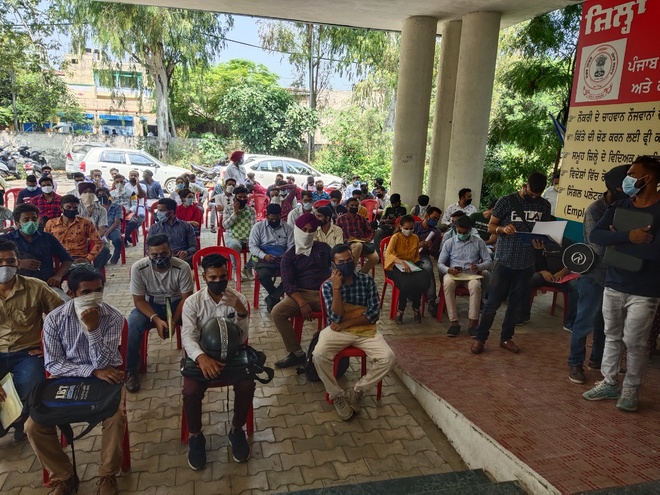 Youths who appeared for interviews at the employment fair in Hoshiarpur on Friday. Tribune photo

As many as 339 youth were placed in different companies and industries through employment fairs organised this week under the Ghar Ghar Rozgar mission in Mukerian and Hoshiarpur.

An employment fair was organised at the District Employment Bureau, Hoshiarpur, on Friday in a series of sixth state-level employment fairs. In the fair, Sonalika, GNA, HDFC Bank, ICIC Bank, Pukhraj, Diamond Herbal and different plywood companies participated. As many as 325 applicants appeared in the interview for 240 posts, of which 134 were selected on the spot.

The first fair in this week was held at Modern Group of Colleges, Mukerian. For 70 posts of ITI, polytechnic and technical degree holders, Modern Automotive, Mandi Gobindgarh, Government Polytechnic College, Talwara , Baba Banda Singh Bahadur Engineering College, Fatehgarh Sahib, Rayat Bahra College, Hoshiarpur, and Modern Group of Colleges, Mukerian. The second employment fair was organised in the office of District Employment Bureau on Wednesday. As many as 12 local companies came for placements. and about 226 candidates participated in the interview.

The DC informed that after interview, 141 boys and girls were selected on the spot by the different companies. Meanwhile, District Employment Officer Karam Chand said in the forthcoming September 24 to 30 job fairs, 3,831 posts would be filled by various institutions. The job seekers can register themselves on www.pgrkam.com before September 14.