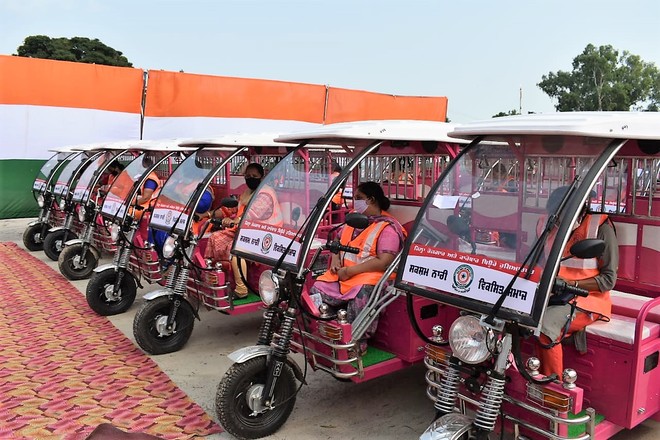 e-rickshaws worth Rs50 lakh were handed over to 38 women at a programme held at Roshan ground under ‘Samarth Mahila Viksit Samaj’ project, a novel initiative of the district administration under the Ghar Ghar Rozgar Yojana.

A brainchild of Industries and Commerce Minister, Punjab, Sunder Sham Arora, the project has received financial support from Coca Cola CSR fund to provide e-rickshaws to the differently-abled, divorced, widows and other needy women.

While handing over the e-rickshaws, Arora said: “The Punjab Government is making consistent efforts under the Ghar Ghar Rozgar Mission to make women self-dependent and it is a part of these efforts that e-rickshaws are being provided to 38 women in Hoshiarpur. The selection process of the needy women under the project was completed before the lockdown and the selected women were provided training and their licences were issued after the successful completion of the training. Arora said the charging point for e-rickshaws has been provided at the park adjacent to the fire brigade office and the parking point has been provided outside the office of GM Roadways.” He interacted with the women and appreciated their enterprising spirit.

Deputy Commissioner Apneet Riyait said this novel as well as noble initiative would boost the self-confidence and also raise the economic condition of these women. This District Bureau of Employment and Entrepreneurship is playing a significant role in ensuring the success of the initiative.