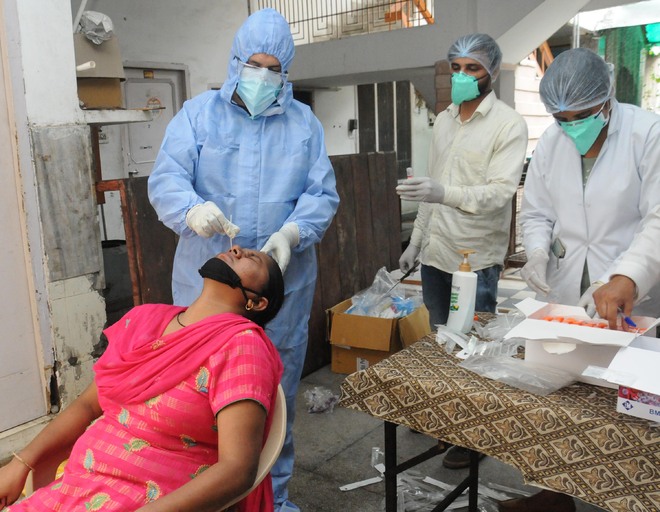 While four more victims succumbed to the virus, three workers from the Civil Surgeon’s office are among the 174 persons, who tested positive for Covid on Wednesday, taking the tally to 3,478.

The infected persons, including both minors and the elderly people, were reported from areas including Jalandhar Cantt, Friends Colony, Maqsudan, Lohian Khas, Preet Nagar, Basti Bawa Khel and Wadala Chowk among others.

The reports of as many as 1,257 samples were received in the district on Wednesday, of which 27 new positive cases of Covid-19 have been reported, taking the total number of patients to 760.

Civil Surgeon Dr Jasvir Singh said of 27 new cases reported today, two cases are of Block Posi and 2 of Hajipur, 1 each from Bhunga, Dasuya, Chakkowal, Tanda, 7 from Paldi, 6 from Garhashankar and 6 from Hoshiarpur city. The six cases of Hoshiarpur city are related to the Police Lines, Banjarbagh and Phagwara road. Civil Surgeon said the new samples of 1,159 persons with suspected flu-like symptoms, taken on Wednesday brought the total number of samples taken in the district to 35,968 so far. According to the reports received from the laboratory, 33,303 are negative, 1,917 reports are awaited and 57 are invalid. At present, the number of active cases in the district is 159 and 580 patients have been cured, while the number of deaths are 21.