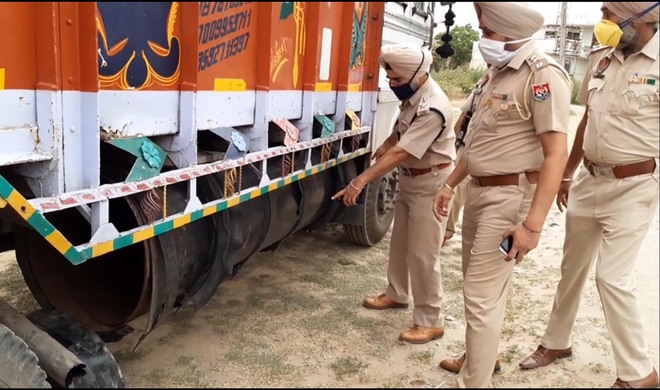 Cops check a special extension chamber attached under a truck in which poppy husk and opium were concealed in Jalandhar on Friday.

The police today arrested four drug peddlers and seized 120 kg of poppy husk and 2 kg of opium from their possession in separate incidents.

Commissioner of Police Gurpreet Singh Bhullar said a team of the CIA staff-1 laid a naka in Samrai village near the Jandiala road and it stopped a truck (bearing registration No. PB08 DE 5377) loaded with onions for checking.

He said during questioning, a search was carried out on suspicion.

Bhullar said the police found a special extension chamber attached with the truck’s diesel tank and when opened, they found 120 kg of poppy husk and one kg of opium from it.

The Commissioner of Police said the CIA team arrested truck driver Amarjeet Singh and his associate Gurpreet Singh and a case under Sections 15,18, 61 and 85 of NDPS Act had been registered against them at the Sadar police station.

Bhullar said in another case, a joint team of the CIA staff-1 and SOU conducted a special checking outside the Indian Oil Corporation and stopped a truck (bearing registration No. PB-06-AK-8135) loaded with coconuts and seized one kg of opium from a special cabin in the truck and arrested Ashwani Kumar of Patoia and Ashwani Kumar of Sahora. A case under Sections 15, 61 and 85 of the Narcotic Drugs and Psychotropic Substances Act has been registered against them at the Rama Mandi police station, he said.