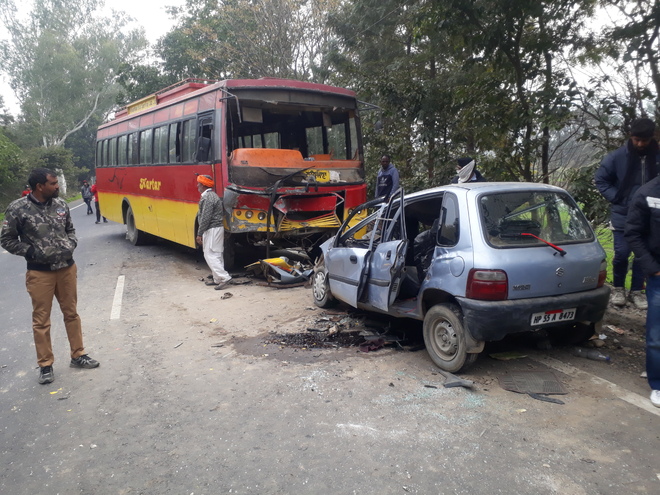 The accident took place on the Talwara-Hajipur road on Friday.

Four persons, including a three-year-old child, were killed after a bus collided with their car on Friday morning. The accident took place on the Talwara-Hajipur road.

The victims have been identified as Sarabjit Singh (23), Sushil Kumar (20), both residents of Roli village, Kuldeep Singh (19), of Sarabha Nagar, Jalandhar, and three-year-old Aryan, a resident Bagrian village, Gurdaspur district.

Ajmer Singh, in-charge, Talwara police station, said a private bus (Kartar Transport), was heading towards Jalandhar and the car was on its way towards Talwara.

He said the vehicles collided near the bridge on Kandi Canal. The crash was so powerful that the bodies of the car occupants got stuck in the vehicle and rescuers had to use hammers and crowbars to pull them out of the ill-fated car. The bodies of the victims were sent to the BBMB Hospital, Talwara.

The bus driver, who has been identidfied as Makhan Singh, a resident of Anandpur Sahib, fled from the spot after the accident.

A case has been registered under Sections 304 A, 279 and 427 of the Indian Penal Code (IPC) against the bus driver.