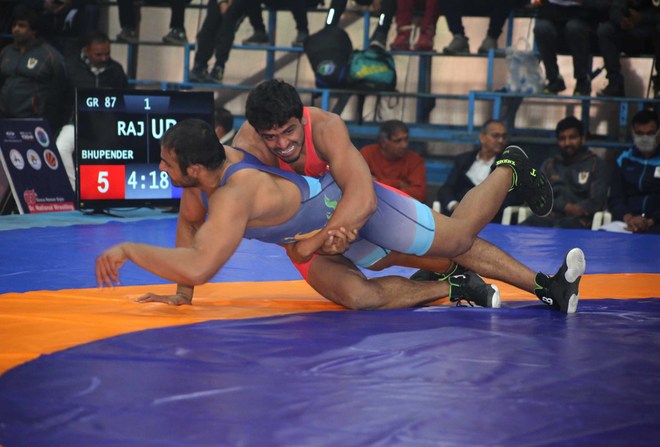 Wrestlers in action during a match of the 65th Senior National Wrestling Championship at LPU near Jalandhar on Monday.

Punjab’s ace-wrestlers Gurpreet Singh won gold without yielding a point and Harpreet Singh defeated his opponent in just 48 seconds. Gurpreet and Harpreet of Punjab and Sunil of Railway Sports Promotion Board have continued their dominance in national wrestling scene, and have fuelled their chances for their participation in Italy for the prestigious ‘Matteo Pellicone Rome Rankings’.

Supported by Wrestling Federation of India (WFI), Punjab Wrestling Association (PWA) and Jagjit Wrestling Academy (JWA), the tournament witnessed nearly 400 wrestlers in action in 10 weight categories amid much admiration and applause. One of the most prestigious wrestling tournaments of the country, it saw aggressive competitions with full sportsmanship spirit for national titles.