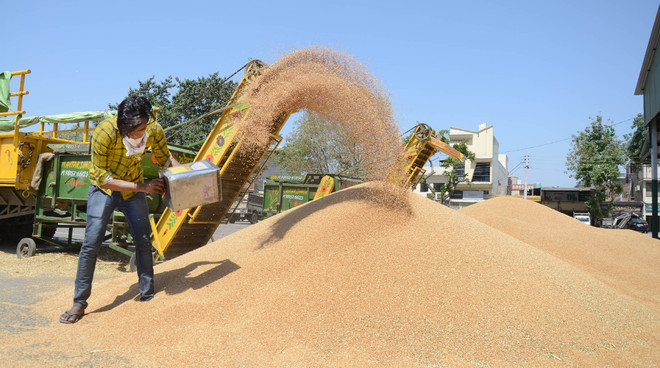 A labourer winnowing the wheat at a grain market in Jalandhar. Photo: Sarabjit Singh

However, after observing a state-wide protest on Saturday (day one of the procurement drive), the arhtiyas (commission agents) were seen busy in getting the produce cleaned, packed and stored.

Parminder Kaur, an official of the Mandi Board at Dana Mandi near Workshop Chowk, said while the exact figures would be received on Monday, nearly 700-800 MT of crops was procured by various government agencies. Major procurement was conducted at the eight grain market committees in cities.

Farmers will receive Rs 1,975 as the MSP on their crop. The government agencies procuring their crops include PUNSUP, Pungrain, Markfed and Warehouse.