A bonfire of cheer & abundance 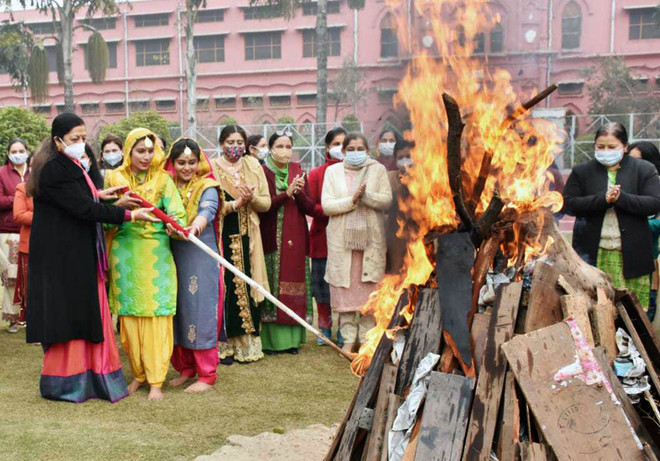 Teachers and staff of KMV College celebrate Lohri on campus in Jalandhar on Wednesday. Tribune photo

The Hoshiarpur district administration celebrated Lohri with the orphans residing in Children’s Home at the Child Welfare Complex. Rajesh Kumar Bhagat, chairman, Child Welfare Committee, Hoshiarpur, with Harbir Singh, Additional Deputy Commissioner, Hoshiarpur, and Dr R Prasad, deputy general manager, Punjab National Bank, and other staff members held the celebrations for the children. They distributed sweets and playing kits to the children apart from interacting and wishing them on this occasion. Bhagat encouraged children to work hard to achieve their goals. He told them that they should not lose heart as it will always bring sweet fruits. Rachpal Singh, Jagmeet Singh and Shalini, members of Child Welfare Committee, were also present.

IVY World School organised the Lohri as the ‘bonfire of abundance’. Lohri marks the onset of fair weather and receding cold leading to abundance and fervent activity. The virtual celebration started with highlighting the importance of the festival. The little ones from pre-primary were told about the traditions associated with Lohri, attire to be worn and seasonal dishes for eating bringing them closer to their culture and roots. Ivyians were enthusiastically attired in traditional Punjabi clothes and showcased their favourite Lohri food like jaggery, rewari, sesame seed, popcorns, groundnuts, etc. The students and teachers celebrated this festival together virtually through art and craft activities like campfire making from paint and ice-cream sticks by K1 children, Sundar Mundariye scene in which our young learners of K2 depicted a beautiful and creative Lohri surroundings on a tray. Tiny tots enjoyed a lot making popcorn holders with fire and wood paper craft. S Chauhan, Principal, Ivy World School, wished the students and all educators a happy Lohri.

Teaching and non-teaching staff and students at DAV University organised a function to celebrate Lohri – a traditional festival associated with the passing of the winter solstice. The celebration started with the lighting of the bonfire by Dr Jasbir Rishi, officiating Vice-Chancellor of the University, while others, including the dean Academics Dr RK Seth were also present. The staff and students gathered around the bonfire, offered peanuts, sesame seeds and other edibles to fire and prayed for well-being and prosperity. The participants also followed the Covid-19 protocol during the function. Students of the university put on an impressive show all along. They performed folk dances, songs and greeted each other. Visibly happy to be back on the campus after the lockdown, the students could not hold back their enthusiasm. Addressing the students, Dr Jasbir Rishi said that Lohri was a festival of warmth and change. Lohri marked the changing season and impending spring. Dr Jasbir said the festival was a symbol of new beginning which held more significance amid the pandemic. “We hope that Lohri will end the suffering of mankind and give way to a Covid-free world,” she said.

Kanya Maha Vidyalaya celebrated the festival of Lohri with fervour and enthusiasm. The celebrations commenced with the address of Principal Atima Sharma Dwivedi. She extended her Lohri wishes to each and every member of KMV family. She appreciated the contribution of all staff members of KMV for working hard and efficiently and taking the college to the new heights. She wished everyone great prosperity and health in the coming times. A cultural programme was also organised during the celebration. The Principal lauded the efforts of Dr Gurjot, Dr Madhumeet and the organising committee for holding the celebrations.

Eklavya School celebrated Lohri festival with boundless joy and fervour. The students showcased their talent in various online activities. The day began by creating awareness among the students about the significance of the most-awaited Punjabi festival. Dances and melodious songs were presented by students as a part of the celebrations. The students of primary school also prepared various craft items associated to Lohri. The students of middle and senior school presented Punjabi ‘Boliyaan’, Punjabi folk songs, Lohri songs and poems. Seema Handa (Director) appreciated all the activities done by the students and encouraged them to understand the value of each festival deeply.

Lohri was celebrated at Apeejay Rhythms, Model Town, with exuberance and fanfare. Due to Covid-19 pandemic, children were not able to attend their school from last one year, so on this festival school planned ‘Gathering on the wheels’. School premises were decorated with colourful kites and flowers. Teachers dressed in traditional attire welcomed their students while parents drove by with their kids in the car. Children were excited to meet their teachers. They seemed highly elated at the occasion and expressed their gratitude for providing them an opportunity to visit the school. The guest of honour, Aruna Arora, joined in the festive celebration in the school premises to give her blessings to everyone on this auspicious occasion. Principal Sinia Sajith and pre-primary in-charge Madhu Bhoocher lit the bonfire and were very happy witnessing the spurring moments.

Beating the winter chill, Sanskriti KMV School Principal and staff joined for the holy rituals of Lohri and sought blessings for the prosperous New Year and progressive days ahead. Even being at home, students of all grades joined in online for prayers and gave cultural presentations on Lohri. Rachna Monga, Principal, in her online address to the staff and students expressed her great hopes for the New Year and wished for all-round productivity in days to come. Chander Mohan, president, Arya Shiksha Mandal, extended his good wishes on online platform to the students and members of the school for the festival.

Lyallpur Khalsa College for Women celebrated the Lohri festival in the college campus. The festive fervour was dedicated to support the farmers’ protests and their rights. Varinder Kaur, an eminent social activist, was the chief guest on the occasion. This marked the traditional bonfire, Giddha (Punjabi dance) and Boliyan(Punjabi songs). Principal Navjot Kaur wished everyone and also explained the importance of Lohri , thereby telling about the traditional folktale of Dulha Bhatti. A slogan writing and face painting competition was also organised by the fine arts department. In slogan writing, Jasleen of BA (Sem-3 applied arts) got first position, Manpreet of BA (Sem-V applied arts) second and Kashish of BA (Sem-V fine arts) third. In face painting contest, Jasleen got the first position, Himanshi Pant second and Kashish got the third spot.

Lohri was celebrated at State Public School, Jalandhar Cantt, with zeal and enthusiasm. The mood of the campus was up beaten and the students wore traditional attires performed and lifted the festive spirit of Lohri. The day began by creating awareness among the students about the significance of the most awaited Lohri festivals. The event was aimed to make the kids aware about the value of the festivals. The children had a gala time as they danced around the bonfire and offered their prayers for the prosperity of the nation. School president Dr Narotam Singh, vice-president Dr Gagandeep Kaur and Principal Savina Bahl greeted the students and wished them success, good health and prosperous future.

The Punjab Institute of Medical Sciences (PIMS) celebrated Lohri in a festive mood. Celebration began with the lighting up of the bonfire by resident director Amit Singh and director-principal Dr Kulbir Kaur. Entire PIMS family including doctors, nursing staff, MBBS students and paramedical staff gathered to celebrate the very first festival of the year. Amit Singh, resident director of PIMS, greeted everybody and said Lohri is one of the finest and oldest cultural festivals of Punjab. He also added because of pandemic, last year was very stressful for everybody and especially for healthcare workers. As with announcement of vaccine, a ray of hope has arisen for all. Amit Singh said hope this year beings a lot of happiness and good health for everybody. Dr Kulbir Kaur said the PIMS was celebrating the festival to uplift the spirit of doctors, staff and students.

A Lohri dedicated to farmers

Jalandhar: Lyallpur Khalsa College for Women, Jalandhar, celebrated Lohri in the college campus on January 13 under Principal Dr Navjot. This festive fervour was dedicated to show support to the protesting farmers. Varinder Kaur, an eminent social activist was the chief guest on the occasion. Traditional bonfire was organised, along with other activities. Principal Dr Navjot wished everyone and also talked about the importance of Lohri, thereby telling about the traditional folktale of Dulha Bhatti. She also said this function was dedicated to the cause of availing our rights and supporting farmers. A slogan writing and face painting competition was also organised by the Fine Arts Department. TNS

Kapurthala: The festival of Lohri was celebrated with great fervour by the Kapurthala Bar Association in the presence of judicial officials of Kapurthala in the court complex. District and Sessions Judge, Kapurthala, was the chief guest of the day along with his subordinate judicial officers, including Additional District and Session Judges Rajwinder Kaur, Dr Ram Kumar Singla, Jaspal Verma, Raman Kumar, Chief Judicial Magistrate Monika Lamba and Judicial Magistrates Priyanka Sharma and Poonam Kashyam. DBA President Malkiat Singh Thind Secretary Sandeep Singh and Press Secretary Pawan Kalia welcomed the all Judicial Magistrates. Congratulating everybody on the occasion, District and Sessions Judge Kishore Kumar said Lohri is a festival of warmth and abundance. He said Lohri is predominately celebrated in Punjab and its neighbouring region. He conveyed his best wishes for better health and future to all Judicial Officers and the Bar members. DBA President Malkiat Singh Thind also congratulated all the Judicial Magistrates and his colleagues for their prosperity and happiness in future endeavours. He laid stress on better Bar-bench relations and assured all judicial officers for extending full co-operation in court functioning to clear the pendency of cases. Also senior advocates Harcharan Singh, JJS Arora, Rakesh Sharma, Manjit Singh Raja threw light on the history of celebration of this festival. SS Malhi conducted the stage in an entertaining manner. Vice President Pardeep Thakur, Harpreet Singh Baba, Piyush Manchanda, Gian Singh Noorpuri, Jugraj Singh Kahlon, Sushil Kapoor, Narinder Walia among hundreds of advocates were also present. TNS