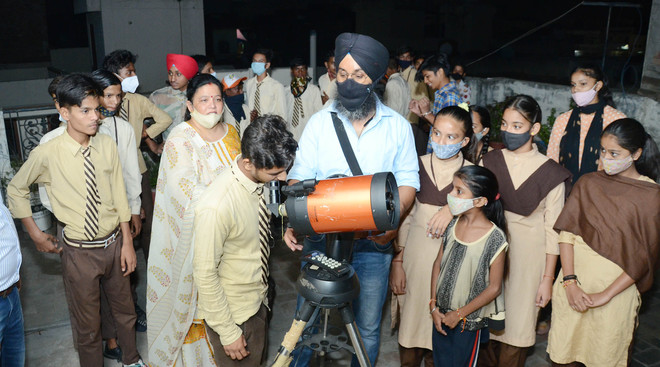 Students of GHS, Harnamdaspura, view planets through an astronomical telescope in Jalandhar.

Students of Government High School, Harnamdaspura, got a rare chance to view planets and Moon through astronomical telescope set up here this evening.

The event was organised in association with Pushpa Gujral Science City. The experts from science city brought the equipment and set it atop the third floor of a house in front of the school campus for the view. Though the planets Saturn, Jupiter and Venus were also visible with naked eye today but they could be seen more clearly through the telescope. School principal Anjali said, “These are the days of the year when the planets are close to the Earth. Though Venus becomes visible quite often, Saturn and Jupiter are also visible these days because of their large size and proximity to the Earth. So, we tied up with the science city to make arrangements for the students to have a closer, detailed view.”

Rama Bhatia, science teacher, said the students of Classes VI to X had been called again in the evening for the event. “The staff of the science city first gave them a presentation in the classroom and then took them on the rooftop for the actual view,” she said.