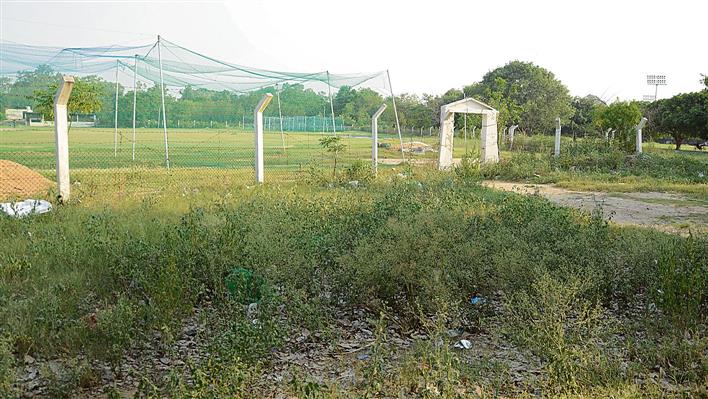 The Burlton Park lies in a dilapidated state in Jalandhar. Photo: sarabjit Singh

It has been almost 12 years since it was planned to set up a multi-purpose sports hub on nearly 60-acre land at the Burlton Park here, but the project which was expected to change the scape of the city, is yet to see the light of day.

The sportspersons from the city had pinned high hopes as they were to receive best facilities in the heart of the city, but nothing has come up since 2008. Other than setting up a world-class cricket stadium in 26-acre land and a hockey stadium in a nine-acre area, the rest of the space was to be used for developing other sporting facilities including football, an all-weather swimming pool, badminton, basketball, volleyball, squash, handball, netball, a shooting range, skating rink, jogging and a cycling track, billiards, snooker, judo, gymnasium, besides a five-star hotel, spa, health club, restaurant, bar, lounges, meeting halls, 70 shops and commercial centres.

A fresh proposal for the project was made by ex-CEO Smart City project Jitendra Jorwal in April 2019. Tenders have been floated many times — last being in January 2020 — but there has so far been no headway.

The delay has also been causing an escalation in the amount of the project. When it was first proposed during the tenure of SAD-BJP government, there had been plans to spend Rs 100 crore. But tenders for the same had been floated for an amount of Rs 250 crore six months back. Mayor, Jalandhar MC, Jagdish Raja, says, “There could be no progress after recalling of tender as all major works had halted since the lockdown started.”

In December 2008, it was during the tenure of then local bodies minister Manoranjan Kalia that two British architects had visited the site, on advice of the BCCI, for giving suggestions to develop a cricket stadium. However, the scenario went sour as residents opposed the felling of trees and destruction of the green belt in the area and filed a PIL in the court in 2009.

In May 2010, CR Narayana Rao Architects from Chennai were selected to work on the project out of 27 companies of international repute which participated in the expression of interest and bidding process. For funds, the Punjab Government had tied up with HUDCO.

Come 2012, the project was handed over to Hyderabad-based Nagarjuna Constructions company at a cost of Rs 130 crore and HUDCO sanctioned a loan of the same amount. Later, the loan got written off sending the project up in the air, yet again.

Ever since then, the project has been listed in the items to be discussed in the MC House meetings a number of times but to no avail. Ex-minister Kalia says, “It is a sad affair that the project has not progressed an inch. Had it got materialised in time, the economy of the entire city would have taken a giant leap.”

2009: A welfare society approached HC, files a PIL seeking stopping of project as it involved axing of trees.

In May, 2010: CR Narayana Rao Architects from Chennai selected as architects for the project.

January, 2020: Tenders floated again under Jalandhar Smart City Mission. Project will be undertaken on PPP mode at an estimated value of Rs250 crore.