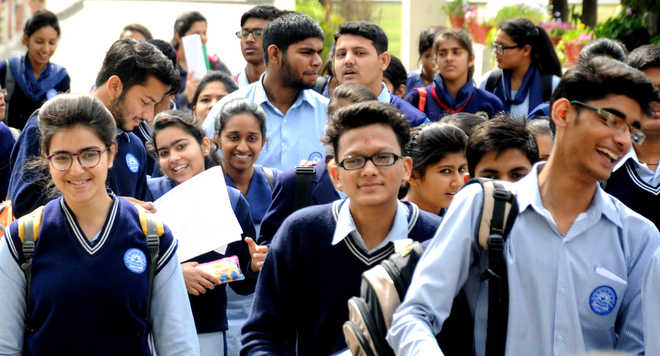 Quite satisfied with the CBSE’s 30:30:40 formula for the preparation of final result of Class XII students, principals of most schools in the city are of the opinion that this was the best and the most fair criterian for assessment of the students.

A majority of teachers and principals are satisfied with the formula declared today as they said it was based on the suggestions taken from them in the past few weeks through online meetings and emails. They said thankfully, there was no surprise element in the formula this time and hence even the students and their parents were not reacting to it. 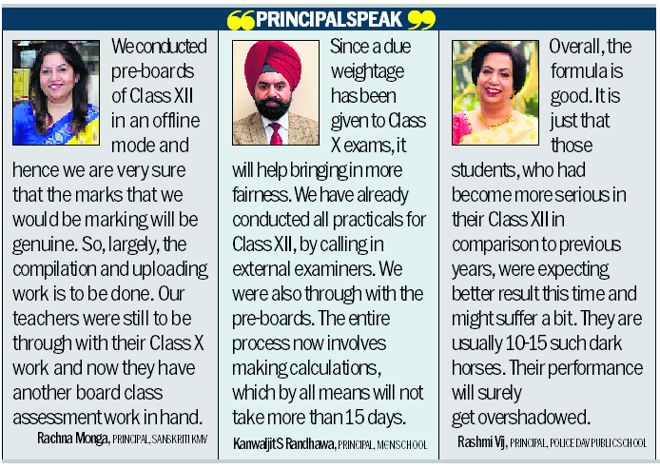 MGN Public School Adarsh Nagar, principal Kanwaljit Singh Randhawa has termed it a perfect formula as it would help the students to be evaluated in the most appropriate manner. “Since a due weight age has also been given to Class X board examination, it will help bringing in more fairness. We have already conducted all practical examinations for Class XII, by calling in external examiners. We were also through with the pre-board examination. The whole process now involves culling the marks, reporting them all and making the calculations, which by all means will not take more than 15 days, even if the teachers work laboriously day and night,” he said, adding that the results of the ICSE Class X pass-out students, who were now with him in Class XII, too would have to be drawn again from the parents which could be little time consuming.

Like him, principal of Sanskriti KMV School Rachna Monga, too has said, the CBSE’s decision of picking the marks of the best three subjects in Class X too was a very wise decision. “Unlike most of the other schools, we had conducted the pre-boards of Class XII in an offline mode and hence we are very sure that the marks that we would be sending would be completely genuine. We conducted the practical of some of the subjects. So, largely, the compilation and uploading work is to be done. Our teachers were still to be through with their Class X compilation work for the CBSE and now they have another board class assessment work in hand. In a way, they will have to work for long hours now for few weeks,” she said.

DAV Public School, too said they had taken pre-boards on an offline mode. “But we had taken three pre-board examinations for Class XII for their better preparation since they stayed home all the year through. Now, we will have to see which pre-board examination marks we should take for the best evaluation. Overall, the formula is good. It is just that all those students who had become more serious in their Class XII from career point of view and were expected to give better result this time might suffer a bit. They are usually are 10-15 dark horses who emerge each year. These are those students who had performed average in previous years but all of a sudden show exceptional results. Their work will surely get overshadowed but the CBSE has surely given them a chance to appear in examination as well somewhere later.”