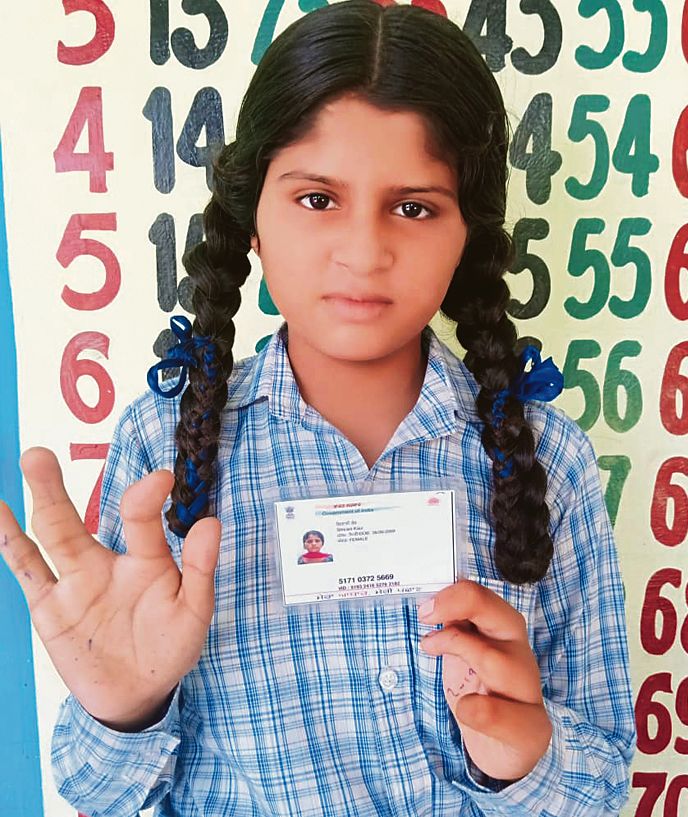 Continuous efforts of Gurcharan Singh of Mansoorwal Dona village have finally borne fruit. His daughter Shivani Kaur, who has four deformed fingers on both hands, has finally got her Aadhaar card made.

The parents of the 11-year-old had been approaching various Aadhaar card facilitation centres for the past few months but were always facing rejection as she has four fingers in each hand instead of five and the tips of her fingers do not have any whorls. Since the staff was not getting her fingerprints, the parents and the child were always sent back.

Jalandhar Tribune had on August 13 carried a news report about the plight of the girl titled, ‘Getting Aadhaar an uphill task for this 11-year-old Kapurthala village girl’. A Class V student of Government Primary School, Mansoorwal Dehati, her father had said that he was unable to receive any scholarship being sent by the government for her daughter as the bank accounts could not be Aadhaar-linked.

After the news appeared, the girls’ parents said the administrative officials approached them and asked them to visit the Suwidha Centre with their issue. “We got the impressions of the feet of the girl. We also got her iris scan done for the biometrics that were mandatory for the Aadhaar card.

“Since they had attempted to get Aadhaar card made earlier too, there were some technical glitches. We got it all sorted out and finally gave her Aadhaar card recently”, said Kapurthala Deputy Commissioner Deepti Uppal.