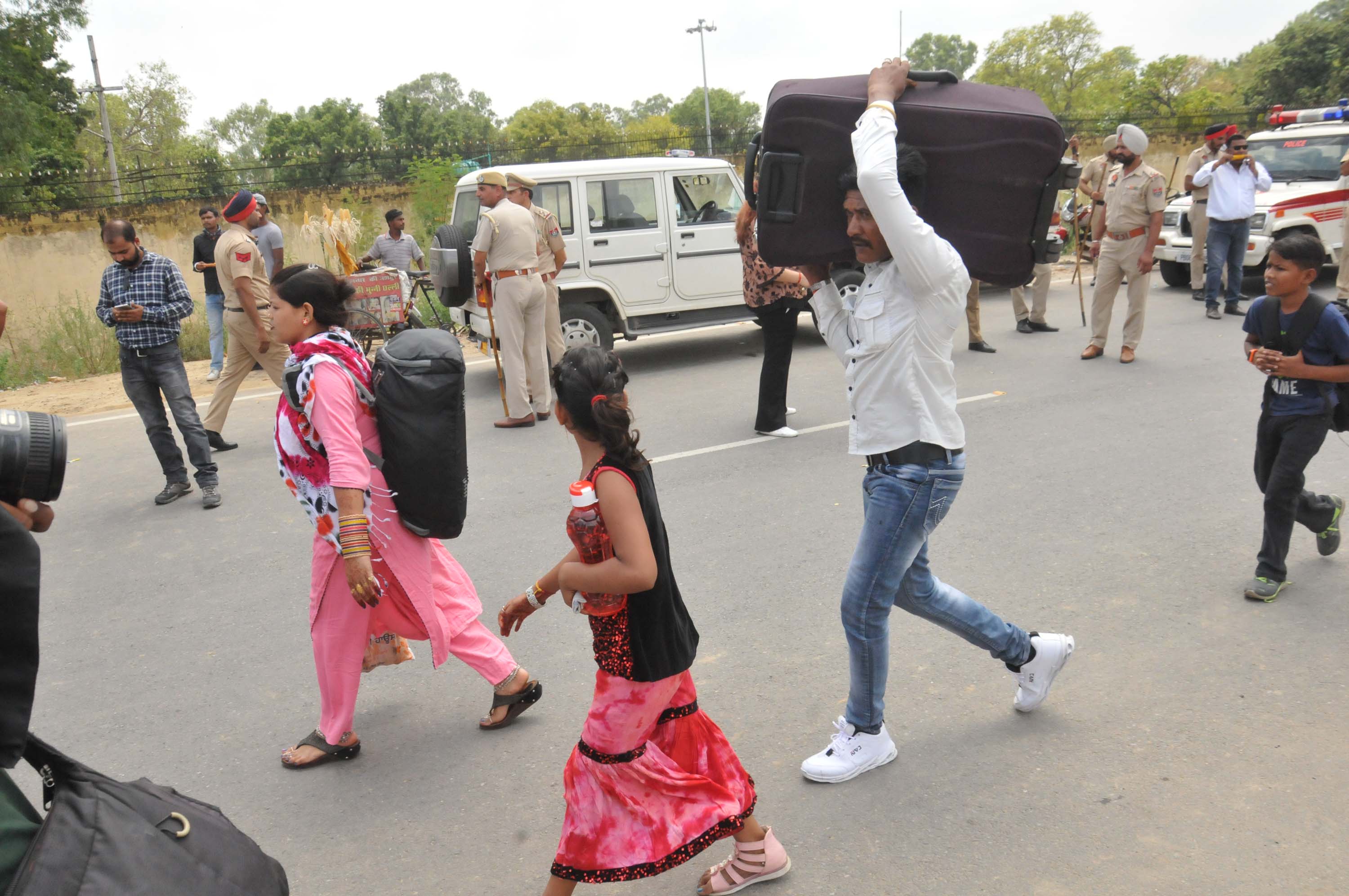 People walk with their luggage as vehicles got stuck on the Amritsar-Delhi highway at PAP Chowk in Jalandhar. Photo: Malkiat Singh

Commuters travelling past the PAP Chowk in Jalandhar on Saturday were at the receiving end as various aspirants of the armed forces had blocked the highway for more than five hours in protest against the Centre’s Agnipath scheme.

Nearly 400 youngsters from eight organisations from across the region assembled at PAP Chowk to lodge a protest.

Vehicles which got caught in the 3-km stretch near the protest site between buses, trucks and other heavy goods carriers could neither move forward nor backward.

Owing to the protest, many people had to alight from their buses and walk for several kilometres on either side of the road – from Jalandhar to Phagwara or Phagwara to Jalandhar – to catch the next bus, cab, train, etc, for their destination. But those in their own cars had no choice. Several commuters who were to board trains from Jalandhar Cantonment railway station had to walk for over 4-5 km encumbered with their luggage to catch their trains.

“I have no option but to run with my luggage to the railway station through all this mess else I will miss my train to Jammu,” Subhash Kumar, who works in a private company in Jalandhar, said this as he went past the dharna site.

Rajinder Singh of Batala, who was going to Talhan Sahib Gurdwara as per his monthly ritual with his wife and a 3-year-old son, said: “I am stuck here for four hours. Thankfully, the weather today is good else it would have been very difficult. So far, we have been managing with whatever small tiffin and water bottles we had.”

It was a tense moment for a family from Jammu. They were taking their daughter Shweta to Chandigarh as she was to appear in her examination as a dental surgeon. “Her examination is in the morning tomorrow and we had taken sufficient margin today so as to be able to reach Chandigarh in time, settle and let Shweta do some quick revision,” her parents said.

WHY DHARNA GOT EXTENDED

Even as the district administration and the police tried to pacify youngsters within the first hour of their protest at the site by taking memorandum from them and getting them have a word with Punjab CM Bhagwant Mann, the dharna kept extending. Mann had assured them that the state government would support them in their move against the Centre. During this period, some youth organisations chose to lift dharna and one side of the traffic from Phagwara to Jalandhar got cleared and normal movement of traffic started. But there were other organisations that were adamant on continuing with the protest and there could be no unanimity among them.

Several youngsters were reportedly detained (in pic extreme right) during the dharna. Manjinder Singh, who was leading one youth body said: “About 100 odd youth could not join us from Tarn Taran as they had been stopped on the way and were taken to a police station, where they were detained for half of the day.” While some youngsters reached the site in buses, there were others who came on bikes and were hence stopped en route. Many who reached the site said their mobile phones had been taken by the police and were returned only after the dharna got over.