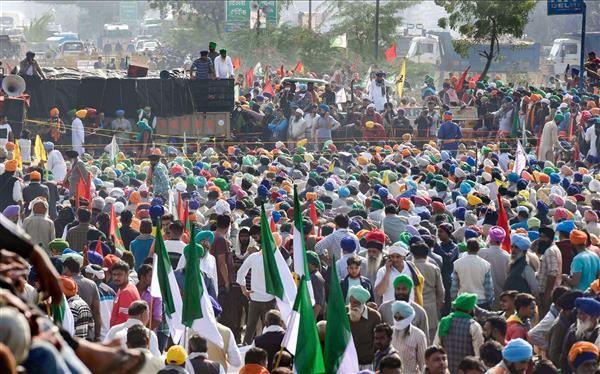 Amid the historic farmers’ agitation at the Singhu, Kundli, Tikri protest sites in Delhi, a number of state organisations and activists are advocating organic farming and sustainable agricultural paradigms for the farming community in the state. Many say the mass protest has brought an awakening, which has paved the way to talk about the shift in agri models. Some say the protests could even serve as a platform to advocate sustainable farming.

For three days in December, Kheti Virasat Mission’s executive director Umendra Dutt camped at the Delhi border, simultaneously holding a kodo millet porridge langar for farmers. First to raise awareness about the adverse effects of GMO foods in the state, Dutt, a staunch promoter of organic and sustainable farming model and a former RSS member and a Gandhian, returned from the protests teary eyed.

Along with addressing farmers’ current issues, Punjab needs an ecological and sustainable agriculture paradigm for farming to turn into a profitable vocation. Seeds, bio-diversity, water conservation are all essential, which need to be factored in to make farmers self-sufficient through a new agricultural model. Along with wheat and paddy, oil seed and pulses also need to be grown. —Umendra Dutt, Founder Member, Kheti Virasat Mission, Punjab

Reason: He was moved by the spirit of farmers.

Environmentalist Balbir Singh Seechewal, while visiting farmers for a day, too, advocated organic farming from the main stage of Singhu earlier this month. He said: “Jad tak jhone, kanak da badlaav na labbheya jave, odon tak Punjab tarakki nahi kar sakda” (as long as no alternative is found to the paddy wheat cycle, the state cannot prosper). Kavitha Kuruganti, founder convener of Alliance for Sustainable and Holistic Agriculture (ASHA) and a long term votary of sustainable farming model across the country, stayed at the Delhi border for 20 days.

While Umendra Dutt was a member of the RSS long ago, he has also been the editor of Swadeshi magazine of the Swadeshi Jagran Manch. A Gandhian for the past several years, he is taken seriously amid the votaries of ‘swadeshi’ farming techniques in the RSS and the Sikh farming community of the state.

KVM, set up in 2005, has 5,000 farmers associated with it in the state and a majority of them are camping at Singhu. Hartej Singh Mehta, Kamajit Singh Hayer, Ramandeep Singh Pharvai and Gurmeet Singh Bahalavalpur — all votaries of organic farming and the office-bearers of the Kheti Virasat Mission — were also present at the protest site from early on.

He adds: “The energy of farmers there gave way to 100 per cent pure protest, which will give way to awakening and political shift in the state. The anger of the past many decades has poured onto the protests. Along with addressing farmers’ current issues, Punjab needs an ecological and sustainable agriculture paradigm for farming to turn into a profitable vocation. Seeds, bio-diversity, water conservation are all essential, which need to be factored in to make farmers self-sufficient through a new agricultural model. Punjab is importing oil seed. Along with wheat and paddy, oil seed and pulses also need to be grown in the state. The MSP and procurement issues will see a sea change with a change in the agri paradigm shifts itself.”

Environmentalist Balbir Singh Seechewal also said: “My concern is — suppose once the bills are withdrawn, what is the future plan? Rivayti faslan ne dharti hethla pani muka ditta (traditional crops have sucked the state waters). The overuse of pesticides has given way to cancer. I think farmers’ agitation is the right place to point out the harm caused to the farming community through decades. Farming in future needs to conserve the water table and increase the fertility of the soil and rid it of pesticides to preserve our future generations. Guru Nanak farmed land at Kartarpur and fed. He didn’t use any pesticides. That is what the state needs now.”

Bangalore-based activist Kavitha Kurugati said: “I don’t believe Delhi protest could give a platform to raise the issue. But it certainly has given you the potential of dialogue to take the issue forward. Sustainability, self-reliance, freedom from corporates and natural organic practices which lead to sovereign agricultural models are the future for farmers.”