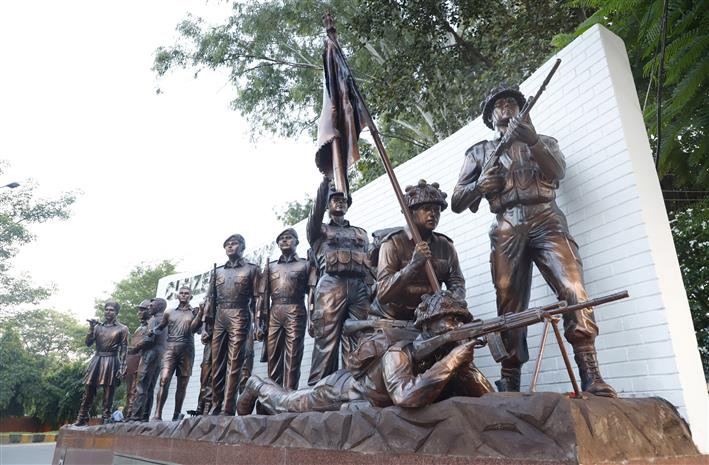 Statues, set up at the TA Chowk in Jalandhar Cantt, depict the transition of civilians with common occupations, including farmers, lawyers etc., into Army personnel after joining the Territorial Army.

On the 16th of August, one of the oldest units of the Army in Jalandhar turned 100. Jalandhar Terriers, as the 112th Infantry Battalion (Territorial Army) Dogra is fondly called, was established in Jalandhar on August 16, 1922, during the British era and has just completed a centenary of its raising.

As a commemoration of the event, an intersection in Jalandhar Cantonment falling near the unit and abutting Nalwa Road has been named as Territorial Army Chowk (TA Chowk for short). Various murals, artistic and informative structures about the 100-year-old unit have been installed at this roundabout which has now emerged a selfie points for the people from across Jalandhar.

The inauguration of TA Chowk was done by General Officer Commanding-In-Chief, Southern Command, Lt Gen JS Nain, who is also the Colonel of the Dogra Regiment and Dogra Scouts. The GOC-in-C had tea with the troops. To mark the occasion, a Special Sainik Sammelan and veterans lunch was also organised at Vajra Sainik Institute for which 148 ex-servicemen from various parts of Punjab, Himachal Pradesh, Jammu and Kashmir and Haryana participated. They recounted old times and stories as they celebrated the landmark event.

The unit was raised at Jalandhar Cantt on August 16, 1922, as 11/17 Indian Territorial Force (ITF) under Maj WB Cunnigham MC. The unit was re-raised as 6/17 ITF in 1941 and as 17 ITF in 1946. It was again re-christened on August 22, 1949 as 112 Infantry Battalion (TA) and got affiliated with the Dogra Regiment. The unit has participated in big operations of the Army since Independence. It is credited with defending the Halwara and Adampur airfields from the Pakistani paratroopers during Op Riddle. It has also had three Sena Medal awardees — Capt Bal Krishan, Lance Havildar Dhana Singh and Lance Naik Ranjeet Singh. The battalion has also won the Chief of Army Staff trophy for the Best Territorial Army unit thrice. Over the years, it has galvanised as a seasoned operation-ready outfit and proven itself to be a force multiplier.