Around 2.5L families to get smart ration cards in Jalandhar district 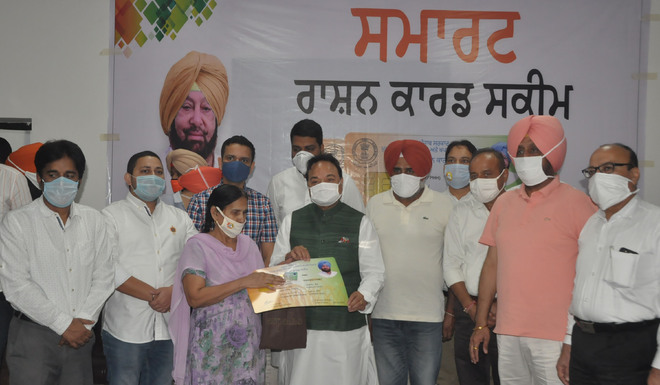 MP Santokh Singh Chaudhary hands over a smart ration card to a beneficiary in Jalandhar.

In a step towards ensuring effective and transparent distribution of food grains and giving freedom to eligible beneficiaries to get ration from any depot holder in the state, Member of Parliament (MP) Santokh Singh Chaudhary on Saturday started the state government’s ambitious pro-poor digital initiative, Smart Ration Card Scheme, by handing over smart cards to beneficiaries at an event organised at the District Administrative Complex.

The scheme was simultaneously launched by MLAs Sushil Kumar Rinku, Avtar Singh Junior Bawa Henry, Surinder Singh and Hardev Singh Ladi Sherowalia in their respective constituencies of Jalandhar West, Jalandhar North, Kartarpur and Shahkot, respectively. The MP said the scheme would set a new milestone in the public distribution system in the state.

“People are now free to obtain food grains from any government fair price shop (ration depot) of their choice without worrying about transferring their ration cards to the concerned depot,” the MP said.

He said the new system would weed out fraud or pilferage in the system as the entire process has been computerised. He said a total of 2, 48,205 families in the district would get smart chip-embedded ration cards containing details of the beneficiary.

He said under the scheme, the beneficiaries get food grains twice a year and a single member of each family would get 30 kg of wheat (5 kg every month).

Chaudhary said the smart ration card holders need not carry identification proofs such as Aadhaar to avail themselves of the share of food grains from any of 917 ration depots in the district.

1,97,771 smart cards to be distribted in Hoshiarpur

The Hoshiarpur MLA said it was a revolutionary step taken by the state government, which would go a long way in providing grains to eligible beneficiaries digitally anywhere in the state from any depot. The chip-enabled cards were linked to the EPOS machine along with the details of beneficiaries and their families and these cards would be operational at all authorised EPOS machines.

In Hoshiarpur, as many as 1,97,771 smart cards covering 7,49,298 beneficiaries would be distributed among beneficiaries. More than 35,000 cards have been received by the administration and the remaining would also be handed over shortly.

The minister also mentioned that as many as 1.41 crore members of 37 lakh families would be benefitted with this endeavour. He said now there was no need to carry any other document to the depot for getting wheat if the beneficiary had a smart ration card.

Meanwhile, Chabbewal MLA Dr Raj Kumar said not only smart ration cards, but a health insurance cover of Rs5 lakh was also being provided to the beneficiaries under the Sarbat Sehat Bima Yojana. With the announcement by the CM to include nine lakh additional smart ration cards to the existing number in the state, the Hoshiarpur district would get additional 14,000 such cards, which provides a chance to those beneficiaries, who could not make their cards earlier, Dr Raj Kumar said. Sham Chaurasi MLA Pawan Kumar Adia and Deputy Commissioner Apneet Riyait were also present.