As curbs ease, only private buses manage to run with full capacity 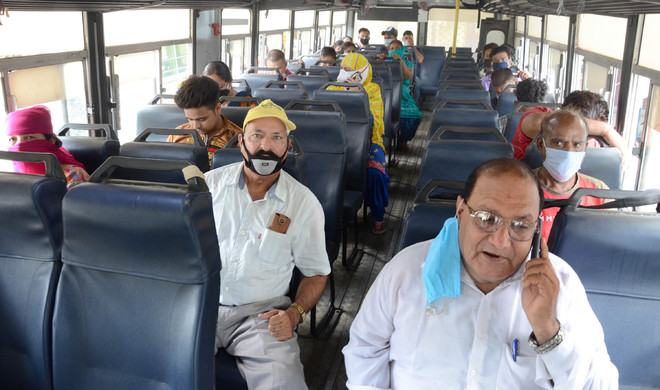 Roadways drivers and conductors couldn’t ferry more than 25 passengers as they didn’t get any letter regarding permission to operate buses to full capacity in Jalandhar. Photo: Sarabjit Singh

Two days after the Chief Minister permitted all passenger buses including private, roadways and PRTC to ply without following social distancing norms with full capacity, the roadways bus drivers and conductors still could not ferry with more than 25 passengers. Only the private bus operators in the district seemingly took benefit of the ease in the restrictions. While the roadways/Punbus staff rued that they didn’t get any written official letter regarding permission to operate buses with 100 per cent capacity, the private bus operators were contended to resume their services by ferrying passengers to their full capacity. The state government had earlier allowed plying of buses with 50 per cent capacity.

Kuldeepak, an official at the city bus stand, who manages the permit and routes of roadways buses, said the buses today operated with earlier guidelines only and not more than 25 passengers were carried in a bus. He said in the absence of passengers, the buses operated on limited routes. “We are waiting to receive an official confirmation before ferrying passengers with full capacity. The late communication of orders is further leading to financial losses as most of the commuters are already booked by the private bus operators,” added Kuldeepak.

Makkhan Singh, a driver of Baba Budha bus service said, without students and working-class employees, it was tough to ferry more passengers and it took us around half an hour to get nearly 50 passengers.

While the CM had announced to do away with the restricted passenger rule in order to cope up with the losses suffered by the bus operators, the passengers sitting in the buses with zero social distancing norms were scared to share their seats with the fellow passengers. Jaswinder Singh, a resident, who was going to Amritsar to meet his relatives said, “Immediately after the Covid outbreak, we were strictly told to abide by the social distancing norms and many challans were also issued subsequently, but now when the infected cases surging every day, it is insensitive to give norms the go-by.”