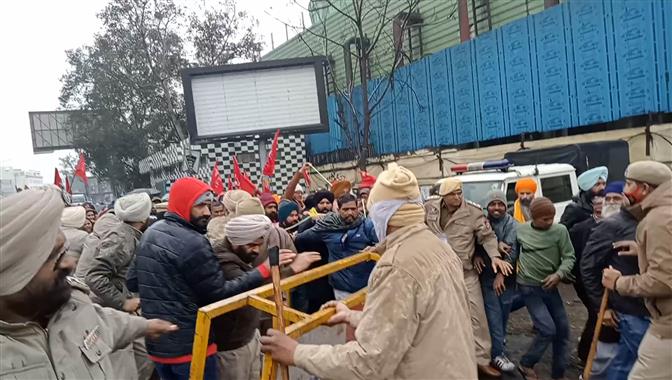 Protesters jostle with police personnel outside a power plant in Nawanshahar on Tuesday. Tribune Photograph

Despite rain and police barricading, Nawanshahr residents put up a massive protest in front of the co-generation plant today against dilly-dallying by the administration in solving the problem of ash emanating from the facility.

A heavy police force was present at the site, and barricades were put to stop protesters from entering the power plant premises. However, the protesters, including residents and activists of various social, religious, political, trade, students and women organisations under the aegis of Lok Sangharsh Manch, gheraoed the power plant and staged a massive protest there.

Manch leaders, including convener Jasbir Deep and others, while addressing the gathering said people had awakened to raise their voice against the chronic problem of the emanating ash as well as the approach of the administration as well as the PPCB to take punitive action against the errant power plant. “The ash emanating from the power plant has been polluting the environment, causing health problems and even road accidents”, they said, adding residents would further intensify the stir and would not relent till the logical solution of the problem is reached.

They further added that if administration failed to resolve the issue, they would soon announce their further course of action.

The gherao was lifted after three hours when SDM Major Shiv Raj Singh Bal reached there and assured the protestors of a permanent solution. However, the protestors were not satisfied and raised slogans. Protesters brought to the notice of the SDM that the power plant management had still been burning paddy straw in violation of the rules. The SDM then asked the police to get the trolleys of paddy straw removed from the plant.

On Monday, women residents of Shiv Nagar railway road locality staged a protest against the power plant officials by holding a broom in their hands. They said ash emanating from the plant had been adding to their woes as they had to clean the floors frequently. They said they were not able to put their clothes on the terrace to dry due to ash. “If the problem is not resolved, we will be forced to hold an indefinite strike,” the protesters said.

Deputy Commissioner Navjot Pal Singh Randhawa said that the administration was quite serious about the matter and is making all-efforts to find a permanent solution to the problem. He said a number of meetings with all the stakeholders had been conducted for the purpose.

“During the meeting conducted on January 17, no representative from the Lok Sangharsh Manch turned up despite repeated phone calls made to them. In the meeting, all modalities were discussed to ensure complete repair work of the power plant so that the problem of ash emanating from it could be solved between February 15 and 17,” he added.

We’re quite serious about matter

The administration is quite serious about the matter and is making all efforts to find a permanent solution to the problem. A number of meetings with all stakeholders have been conducted for the purpose. — Navjot Pal Singh Randhawa, Nawanshahr Deputy Commissioner