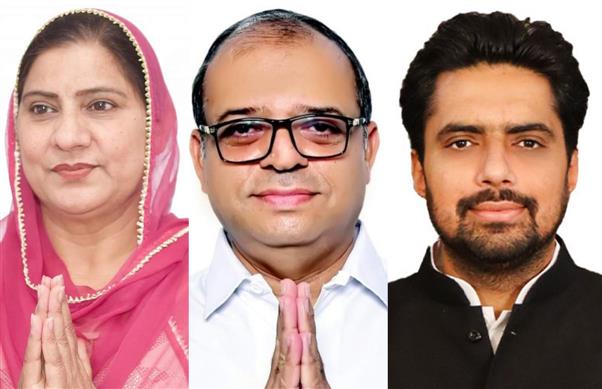 Even as the traditional parties are largely trusting old horses again this time for the Assembly poll, there are some new faces in the fray in some constituencies of the Doaba belt.

The Aam Aadmi Party has fielded some new faces in Jalandhar, retaining only one last-time Shahkot candidate, Rattan Singh Kakkar Kalan, for the Assembly poll. Of the remaining eight, Sheetal Angural from Jalandhar West and Dinesh Dhall from Jalandhar North are new entrants to the party, but have remained councillors with other parties in Jalandhar.

A graduate, Mann (53) has been a role model for women of the region for the past two decades. When her husband was settled abroad, she kept on handling agriculture work by herself. She had even then made headlines as she used to operate tractors in the fields by herself and rode horses. Her political career started in 2002 when she was a Block Samiti member. Later, she remained the sarpanch of Bir Pind for three consecutive terms ending in 2019 and was instrumental in starting various innovative works in her village.

She is credited with setting up a panchayat federation for guiding and training panches and sarpanches, besides making them aware of their rights and duties. She had launched a massive eco drive and planted 5 lakh trees.

She had started a project to track the sex ratio in villages and honour those villages that improved the girl ratio. As many as 6,000 women from the area had been part of her massive campaign that was very active in 2006.

Mann says that she now wants to further expand her area of work and has opted for being an MLA. “In 20 years, work on laying the sewer line has not been completed in Nurmahal and is still underway. My concern is also the fact that there is no good government school in Nurmahal. There is just a single doctor in the government hospital there, which caters to 70 villages. There are no medicines available for the patients.

I wish to work on new projects like beautifying the entry points in Nakodar and streamlining traffic by getting the lights installed. Setting up a ring road in Bilga town too would be on my priority,” she listed works on her mind for her constituency.

Among the Akali Dal contestants, a new face in the Doaba this time is Capt Harminder Singh (69), who is contesting from the panthic seat of Sultanpur Lodhi. He had earlier been with the Congress and was even appointed as the Chairman of Milkfed, Punjab. His father Capt Sujan Singh was a freedom fighter and he himself served the Army from 1972-77. He had organised several ex-servicemen rallies for former CM Capt Amarinder Singh. Though his family is settled in Jalandhar, his native village Nasirpur is in Sultanpur Lodhi. He has the advantage of hailing from the Kamboj community which predominates the area. Outlining his agenda, he says, “My main aim would be to instil a sense of confidence and security in those people who live in fear and have no faith in the law-enforcing agencies. Law and order remains the main issue here. Congress leaders are themselves openly targeting the MLA over the issue of false FIRs. The area has been neglected in terms of medical facilities. I wish to prioritise on this front too”.

Of the BSP candidates in the fray this time, Jalandhar West candidate Anil Kumar Meenia (55) is a fresh face. An MBA passout, he has served in National Insurance Company as the Senior Divisional Manager.

He had been associated with BAMCEF movement of Kanshi Ram for 20 years and quit his job last year, six years prior to his retirement age to join the BSP and serve as the halqa in-charge here. A resident of Deol Nagar here, he says that he wants to build an equalitarian society as envisioned by Dr BR Ambedkar and make a change in the lives of people.

“My main priority would be to keep a check on illegal drugs and liquor in the area. There are at least 130 shops of illegal lottery in my constituency which need to be checked. The sewerage and drainage systems in my area cry for attention. On a rainy day, one cannot reach the 120-feet road,” he enumerated problems and priorities.

Among the Congress candidates announced so far, Amarpreet Lally (39) is the youngest among the new lot. He is BA, PGDCA-qualified and hails from Kot Fatuhi village in Garhshankar, the constituency from which he is set to fight. He entered into politics as a youth leader getting elected in 2008.

A good orator having leadership skills, he rose to become the Punjab Youth Congress chief and is now the general secretary of the Indian Youth Congress. He recently became the co-chairman of the campaign committee of the party. Lally says that though his area is quite backward in terms of facilities, his priority areas would not just be roads, sewer lanes and drinking water, but also other issues like bringing in new industry, providing employment opportunities to youth and good education in schools and colleges.

“My agenda will also include setting up a bypass in Garhshankar and carry forward work on laying kandi canal which is lying stalled at the moment,” he said.