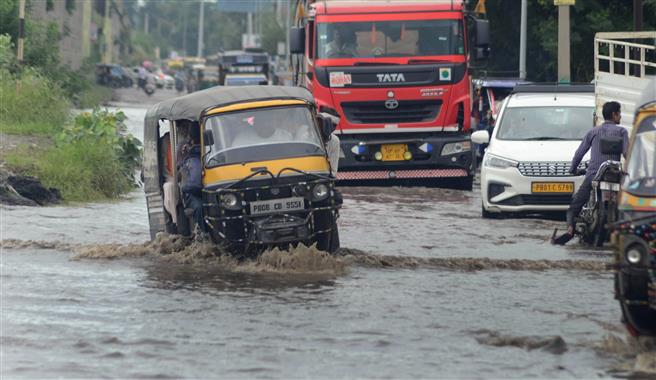 An autorickshaw wades through a waterlogged road in Jalandhar on Sunday. Photo Sarabjit Singh

As per data released by the Meteorological Department, in Doaba, SBS Nagar (Nawanshahr) recorded the maximum rainfall (95.6 mm) in the past 24 hours, followed by Jalandhar (74.4 mm), Kapurthala (66.8 mm) and Hoshiarpur (49.5 mm).

Incessant rain for the past two days in Jalandhar has flattened crops on hundreds of acres at Sadakpur, Talwandi Sanghera, Kakran, Kotla Sujhwal and Dhandowal villages of Shahkot.

At Dhandowal, heavy rain accompanied by strong winds blew a shed and uprooted big trees. Farmers said 20 per cent of the total crop on farm land had been damaged due to rain.

Nirmal Singh, a Dhandowal farmer, said: “In several villages, each farmer has lost crop on 4 to 6 acre to rains and storm. It started raining at 3.30 am today and went on until 9.30 am. Our kitchen shed was blown away by strong winds. Nearly 50 eucalyptus fell due to the rain. Almost all farmers have incurred huge losses.”

In Jalandhar, the maximum temperature was recorded at 26.4°C and the minimum at 21.2°C today. The temprature in the dsitrict dipped by 1.9°C as compared to yesterday.