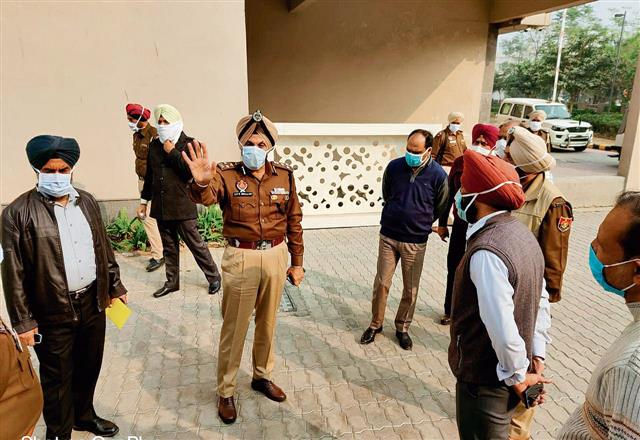 The police have also seized sharp weapons and three bikes among other things from them. One of the key accused, property dealer Gurpreet Singh Ghumman, is still at large.

Commissioner of Police Gurpreet Singh Bhullar said victim Dharminder Mishra had his office near the colony developed by prime accused Gurpreet Singh Ghumman. He said a month ago, Ghumman along with Karan Kumar, who works at his office, indulged in an argument with the victim and workers of his outfit, following which the former decided to teach him a lesson and hatched a conspiracy with others.

The CP said on Wednesday at 7 pm, the accused attacked Mishra with sharp-edged weapons and baseball bats and managed to flee after leaving the victim seriously injured.

He said the CIA-1 staff was put on the task to nab the accused and the team headed by Harwinder Singh scanned the CCTV cameras, carried out a technical investigation and succeeded in cracking the case by arresting eight of the accused from their residences.

Gurpreet Singh Bhullar said a case under Sections 323, 324, 427, 326, 148, 149, and 120-B of the IPC had been registered against the accused at Basti Bawa Khel police station and all eight accused would be produced in the local court. He said Ghumman, too, would also be arrested soon.

Jalandhar: Commissioner of Police Gurpreet Singh Bhullar reviewed law and order situation in the city on Friday. He inspected police nakas, shopping malls and other vulnerable points, falling under the jurisdiction of the Police Commissionerate. The Commissioner of Police was accompanied by Deputy Commissioner of Police Gurmeet Singh. Bhullar directed police personnel to beef up security at all vulnerable places. He said police teams/PCR staff has been monitoring and patrolling the city round-the-clock, especially those areas which witness high footfall on weekends, including shopping malls, markets and restaurants. He said their main objective is to prevent crime and instil a sense of security among residents. He directed officials to ensure that night curfew was strictly imposed to tackle the spread of Covid-19. TNS