Schools told to reopen from Monday 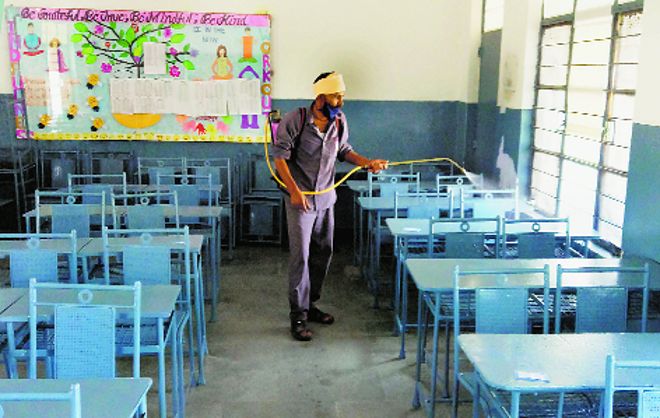 Clearing the air over the reopening of educational institutions in the state, the state Education Department on Thursday issued a fresh circular, directing the District Education Officers (DEOs) to open the schools (both government and private) in their respective districts from October 19 onwards.

The installation of a Covid care centre in all the schools is among the mandatory guidelines to be followed by all the school heads. After a gap of over seven months, the schools were expected to reopen from October 15 onwards, as per the earlier announcement of the state government. However, in the absence of the standard operating procedures (SOPss), the schools could not unlock their gates for the students today.

In most of the schools, only teachers and other staff members marked their attendance. Sunita Randhawa, Principal, Government Co-ed School, Ladowali Road, said only staff members came to the school on Thursday. We were expecting that the students would also join us, but we were informed that students could enter the schools only if the guidelines would be released by the Education Department.

Similarly, in other schools as well only digital classes were conducted and administrative work was done in most of the schools. Meanwhile in the evening, the Education Department released the guidelines to be followed by the schools to prevent students from contracting the virus. DEO (Secondary) Harinder Pal Singh said the Education Department was waiting for the SOPs to be approved by the state Health Department.

The decision to reopen the schools was made immediately after receiving the nod from the Health Department. “In the first phase, the schools will remain open for students of Classes IX-XII only and students will have to get the permission in writing from their parents for attending the schools,” said the DEO. Schools in the state have been shut since March this year in view of the Covid-19 pandemic. However, online classes are being conducted.

SOPs to be followed by heads

The Education Department was waiting for the SOPs to be approved by the state Health Department. In the first phase, the schools will remain open for students of Classes IX-XII only and students will have to get the permission in writing from their parents for attending the schools. —Harinder Pal Singh, DEO (Secondary)