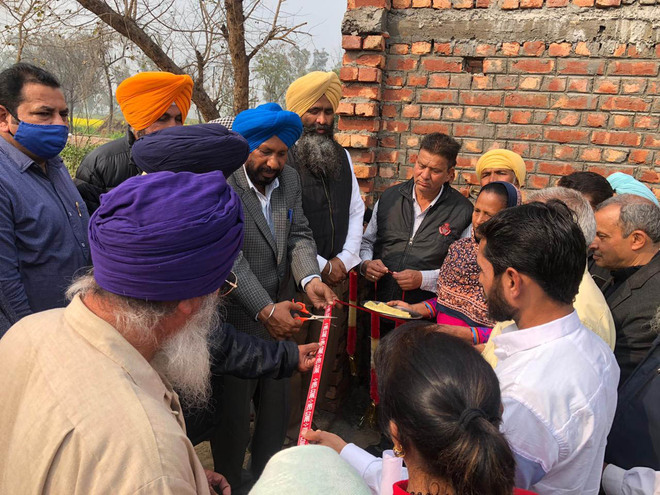 The foundation stone of a new classroom being laid at a government school in Phagwara. Tribune photos

In order to provide better education to the students studying in government schools, the state government has decided to turn all the existing schools into smart schools. While inaugurating a development programme, Phagwara MLA Balwinder Singh Dhaliwal, stated that out of 782 government schools in the district 728 schools have been converted into smart schools so far and the remaining would also get a facelift by the end of March. Apart from developed infrastructure, the students in the school would have access to internet and modern labs. Owing to the efforts of the Education Department, the enrollment rate in government schools has increased by 17 per cent, Dhaliwal added. He also laid the foundation stone of new classrooms at Government Senior Secondary School, Larke, Phagwara. “The department officials have also been asked to provide furniture, desks and sports equipment in all the government schools of Phagwara,” Dhaliwal said.

While the state government has dedicated the next financial year as the year of development under which several schemes related to development of villages would be launched in the next budget session, the developmental works under ‘Smart Village’ scheme has been commenced in the district. Addressing the villagers on the occasion of developmental works at villages Brahmapur, Miranpur, Madhopur and Ranipur Kambo, the local Congress MLA stated that overall development of the constituency was his duty and he was fully committed to it. The construction of parks, stadia, sewerage system and concrete streets in the villages of Phagwara constituency has already kicked off. Besides, ‘Har Ghar Pani, Har Ghar Safai’ project was also launched for the supply of drinking water to every household. The village panchayats, too, play the role of supervisor in maintaining the quality of works and their completion within the stipulated time.

Punjabi Kala and Sahitya Kendra, Sangeet Darpan, Punjabi Virsa Trust, Escape Sahitya Organisation and Artist and Writers organisation launched a protest march to pay tributes to the farmers who died in the farm stir at the Delhi and Haryana borders. The march was started with a blood donation camp. Taranjit Singh of Punjabi Kala and Sahitya Kendra and Amit Shukla of Punjabi Virsa Trust, said, “the march was organised on the occasion of ‘Punjabi Ma Boli Day’. The students, who participated in the march also supported the farmers’ protest and held posters displaying slogans related to rights”.