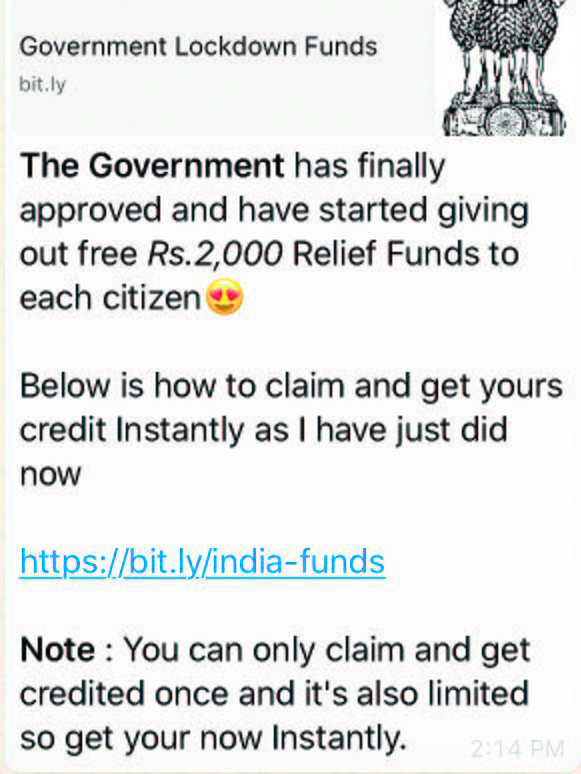 A fake message claiming that the state government is giving Rs 2,000 to each citizen as Covid-19 relief package is doing the rounds on WhatsApp. Some residents have also received the fake information as an SMS.

Shailja Sharma, a resident of Punjabi Bagh, told The Tribune that she and one of her colleagues had received a forwarded message in a WhatsApp group. She said the message read: “The government has finally approved and has started giving out a free Rs 2,000 relief fund to each citizen. Below is how to claim and get yours credit instantly as I have did just now — https://covid19-relieffund.com. You can only claim and get credited once and it’s also limited so get your account now instantly.”

Shailja said though she was curious to open the link to check if the URL was valid and also know the procedure to avail herself of the relief. However, a friend of her told her that it could be a trap and her cell phone could be hacked.

“These days, everyone is looking for aid. Despite being a graduate student and having knowledge of phishing attacks and other cyber crimes, I was elated on seeing the message. But I thank my friend who stopped me from clicking on the link,” she said, adding that there were many, especially the uneducated, who could fall into such scams and end up losing their precious money. So, the government must educate people about rising online frauds, she said.

Palvinder Singh, a cyber security researcher and CEO and founder of Secuneus Technologies, said as the lockdown had confined people to their homes and given a big push to digital platforms, especially online transactions, cyber criminals, got an opportunity to defraud innocent people. He said fraudsters were spreading fake messages and hoodwinking them into transferring money to accounts that had no connection with Covid-19 relief operations.

“Cyber frauds have become so common during the past few months that both banks and police authorities are forced to send out warnings to account holders, warning them to be careful of such fraudsters. Even the Digital Investigation Training and Analysis Centre (DITAC) of the Punjab Police State Cyber Crime Cell recently issued an alert regarding the phishing fraud. The DITAC, on its official social media handles, has made it clear that the government was not paying any such relief and the people must avoid clicking on such links,” Palvinder said.

When asked how to recognise such fake messages in the first, Palvinder said: “Such phishing attacks can permit cybercriminals to assume control of the user’s device (mobile phone) or access data and money-related information and steal their money. Therefore, whenever a person receives such messages, especially those that promise jackpot or financial assistance, they must cross check the information on the Internet. If they have already clicked on the link, they must avoid sharing any personal or confidential information such as Aadhaar or their bank account number,” he added.

Monika, in-charge, Cyber Crime Cell, Jalandhar, said no such case had been reported in the city so far. “However, we have received information that such fake messages are being circulated, so the residents must remain alert,” she said.

In the supervision of Palvinder Singh, a cyber expert, when The Tribune correspondent clicked on the URL (https://covid19-relieffund.com), it took her to a page that showed the congratulatory message — “Get free Rs 2,000 instantly to your bank account. Please complete the survey to avail free lockdown relief funds. Then came a question asking ‘Are you a bona fide Indian citizen?’. After answering the question, it was observed that the link actually contained a questionnaire seeking more details such as name, address, email id, contact number, bank account number, Aadhaar number, etc.