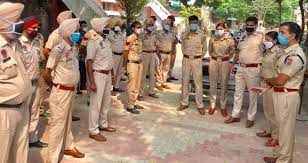 Following the Bharat Bandh call by the Sanyukta Kisan Morcha on September 27, the police have framed an alternative route map for those using the highways to reach their respective destinations. - File photo

Following the Bharat Bandh call by the Sanyukta Kisan Morcha on September 27, the police have framed an alternative route map for those using the highways to reach their respective destinations.

While nearly a 100 traffic police personnel will remain deployed on highways and other roads for the safe passage of commuters, the anti-riot police squad will also be present at the protest sites to ensure safety of both commuters and agitators.

The Bharat Bandh will be organised in 10 different sites in the district. Apart from road, rail traffic will also remain affected on Monday between 6am and 4pm. Meanwhile, most of the schools, colleges and other private institutions have also announced work from home on bandh day.

He said farmers and their supporters would forcefully shut shops, banks or any other organisation found open during the bandh hours. Besides, major protest sites include PAP-Rama Mandi flyover, Jalandhar-Nakodar Road, Kartarpur-Amritsar highway, Jalandhar-Pathankot and Jalandhar-Kapurthala road.

DCP Traffic Naresh Dogra said the traffic police were on its toes to assist commuters on the bandh day.

However, he appealed to locals to avoid any travel on Monday to avoid any inconvenience as farmers would block the road from all sides,” Dogra said. In addition, traffic jam problem could also trouble people on the village road, if heavy vehicles also use the same routes.

Similarly, DCP Jagmohan Singh said a large number of cops would also remain deployed on the protest sites to avert any untoward incident. Companies of anti-riot squad would also be present to make sure nothing goes wrong.

Farm leaders have, however, given exemption to the personnel of police, Army, Paramilitary forces, students going for examinations, ambulances, fire tenders, people in need of medical care etc.

As the railway tracks are also likely to be blocked, around 50 sets of trains have also been either cancelled, short-terminated or diverted.