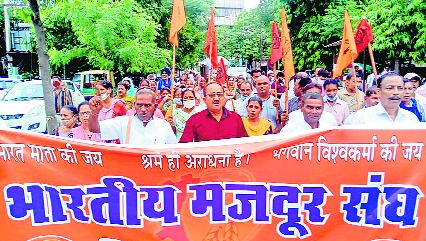 Members of the Bhartiya Mazdoor Sangh during a protest in Jalandhar on Saturday. Tribune photo

The Bharatiya Mazdoor Sangh organised a rally at the tehsil complex on Saturday to protest rising inflation, undue cuts in salaries and low allowances. Members of the association submitted a demand letter to the DC, Jalandhar, addressed to the PM Narendra Modi on these issues. The rally was led by Bhartiya Mazdoor Sangh, Punjab, and Chandigarh treasurer Manoj Punj. He said owing to the pandemic, there had been a decrease in the industrial activities coupled with economic crisis, cuts in salaries and inflation. They said rise in prices has taken a toll on general public.

Members of the Sangh said in the past 18 months, inflation rates have crossed the limit of six per cent hike while in previous years it stayed between 3 to 5 per cent hike. Punj said manufacturers should devise a law to determine the price of every commodity.