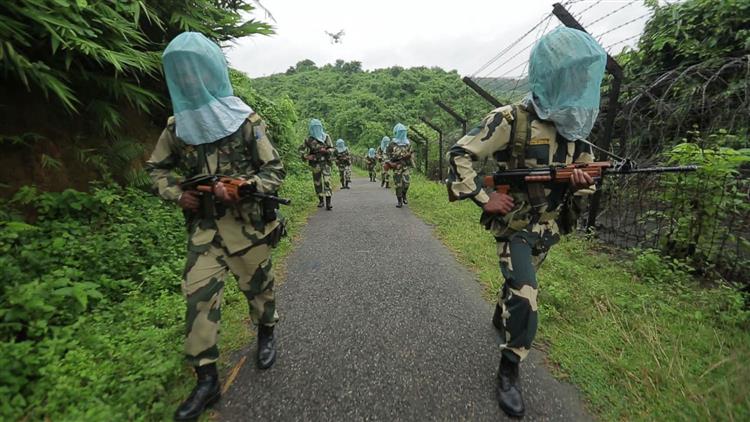 Rehearsal for the BSF Raising Day celebrations underway in Jalandhar on Wednesday.

It was on December 1, 1965 that the first sector of the Punjab Frontier of the BSF was raised with its headquarters in Jalandhar.

Over 7,000 women serving in the force

After the Indian Army, the BSF is the only Central Armed Police Force in the nation that has an independent air wing, effective artillery regiment, dedicated marine division and a special intelligence branch.

The BSF is also the sole paramilitary organisation globally to use an active camel cavalry to patrol the sands of the Thar Desert, which comprise of the common border between India and Pakistan.

The ‘Creek Crocodile - a Quick Reaction Team made of BSF commandos - was also raised to counter threats like that of 26/11. They guard the brackish waters of the Kutch region in Sir Creek to prevent cross-border infiltration.

Despite being a border force, more than 7,000 women of all ranks are serving in the force on the eastern and western theatre.

This Central Armed Police Force has written a glorious saga of valour, sacrifices and dedication. Besides proving its credentials during the 1971 war, the Punjab militancy, the North-East insurgency and the J&K militancy and anti-Naxal operations, the force has also proved its mettle during natural calamities, human relations, adventure, sports activities and many matters of national importance.

National-level celebrations in Amritsar on Dec 4

This is for the first time that the BSF is organising its national-level Raising Day celebrations of its inception in Punjab. The celebrations will be held on December 4 at Guru Nanak Dev University, Amritsar. The 11 BSF Frontiers and a Mahila Contingent are participating in the celebrations. The event will be attended by Minister of State for Home Affairs Nityanand Rai, who will be the chief guest on the occasion. He will be accompanied with Pankaj Kumar Singh, Director General, BSF.

Besides, a tableaux of BSF Water Wing, Air Wing, Central Workshop and Stores and some other important departments of the force will be displayed during the parade.

Till the inception of this largest border guarding force in the world, the police units of bordering states were entrusted with the security of these borders. An attack by a Pakistan brigade on Sardar Post in Gujarat necessitated the requirement of an armed force to function under the Union Government to ensure secured borders. The need of the hour was to raise an armed force trained on the pattern of the Army to defend the borders and also work like the police to check trans-border crimes during peace and thereby inculcating a sense of security among the border population. On the recommendations of a committee of secretaries, the BSF came into being under the leadership of KF Rustamji, the first Director General of the force.

However, to earn all these recognitions and medals, 1,954 brave hearts of the BSF have made the supreme sacrifice in the line of duty. In year 2022, a total of 20 BSF personnel have laid down their lives while protecting the sanctity of our borders.