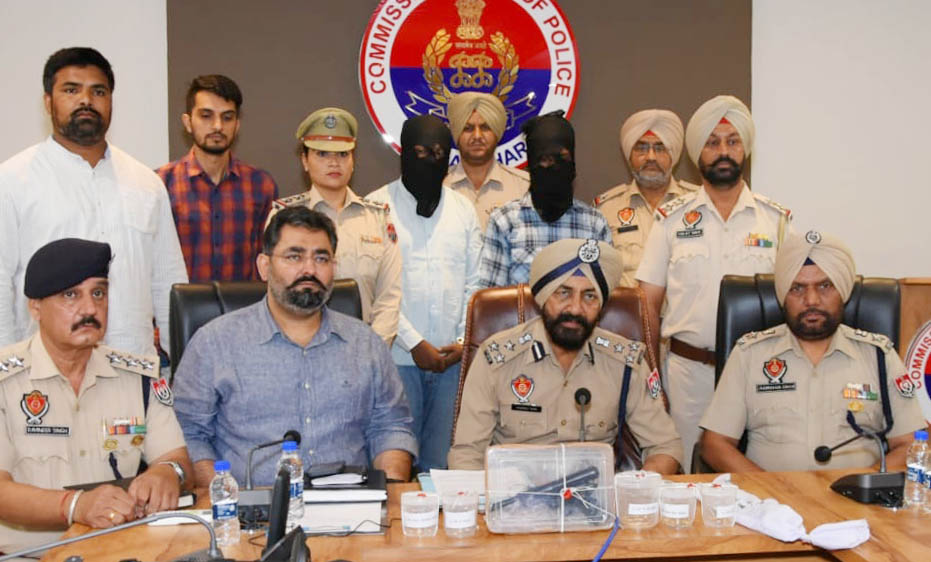 The accused in the police custody in Jalandhar on Tuesday.

In a major breakthrough, the Jalandhar Commissionerate Police on Tuesday claimed to have solved a burglary committed in New Defence Colony-II locality three days ago.

Some unidentified burglars, who had covered their faces, had stolen gold from a house after taking a youth, Jagrit Singh, as hostage at gunpoint. They tied Jagrit’s hands and covered his mouth with a cloth before making off with all gold from the home. The Commissionerate Police started investigation into the matter after registering a case under Sections 382 and 452 of the IPC at the Jalandhar Cantt police station. Commissioner of Police Gurpreet Singh Toor said the police team led by ACP Ravinder Kumar and SHO Rajwant Kaur conducted investigation professionally using human intelligence and scientifically advanced techniques. He said after identifying the culprits as Sumit, a resident of Bihar, and Bikramjit Dutt of Badarpur, New Delhi, the police started search operations to nab them. Toor said within 72 hours of the crime, both the accused were arrested by the police.

The CP further said the team had also recovered all gold ornaments — three gold chains, three gold rings, two gold bangles, five gold earrings and two gold pendants — from them. He said further investigation into the case was on.

Toor said the police were already keep a strict vigil on the law and order situation, but he emphasised the need for better social bonding among people and installation of CCTV cameras at the community and personal levels to further check the rising crime graph.