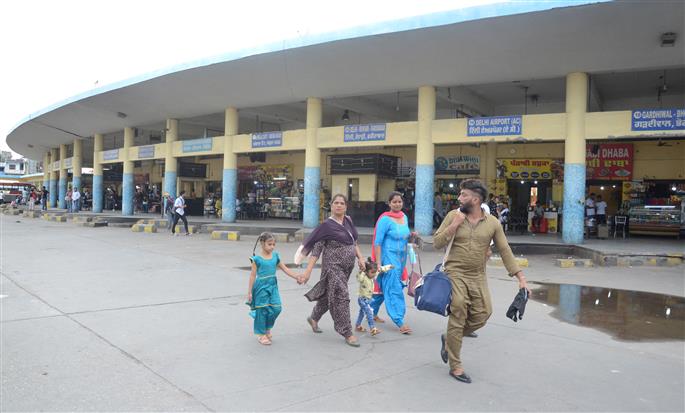 Private bus operators in the district, on a call given by the Punjab Road Transport Workers’ Federation, observed a daylong strike and staged a protest at the local bus stand here today against the Bhagwant Mann-led-AAP government over the non-fulfilment of their long-pending demands.

I wasn’t aware about the strike today. Even after waiting for two hours outside the bus stand, I couldn’t get any bus. Shweta, passenger

The scene outside the bus stand today was no less than a vegetable market. It took me 20 minutes to cross the road. Manmeet, commuter

Holding black flags in their hands, the protesters raised slogans against the government. They said they had time and again sought intervention of the state government to save them from financial ruin, but to no avail. “We are facing huge losses because of the ill-conceived policies of the state government and free bus travel facility to women,” they added.

Sandeep Sharma, a member of the Punjab Motor Union, said almost all private bus operators were under debt and the condition was so bad that they didn’t even have money to pay their loan instalments. He said due to freebies like free bus service to women, they were facing huge losses.

“The state government waived the tax for six months till December 31, 2020, and later from April 1 to July 31 on a kilometre basis, whereas Himachal Pradesh waived tax for 19 months,” he said, adding they also demanded a hike in bus fares in the wake of an increase in diesel rates.

Jarnail Singh Garhdiwal, spokesperson for the Small-Scale Bus Operators of Punjab Association, said they had met the Chief Minister in this regard. He promised that all our demands would be addressed but till date they hadn’t received any response. He said 2,200 private buses and 4,500 mini-buses remained off road today owing to the strike.

Meanwhile, passengers faced huge inconvenience due to the strike. Many passengers were unaware of where to board the bus as protesters did not allow Roadways buses to enter the bus stand. The main entrance to the bus stand remained blocked for the entire day, and the roadways buses which were operating had to pick up and drop off passengers on the roadside.

Passengers also complained that owing to chaos that prevailed on the road outside the bus stand, auto-rickshaw drivers doubled their fares and were charging up to Rs 500 to drop them off till LPU. “It is always the common man who has to bear the brunt of these strikes. Had the government talked to these protesters on time, the public would have not suffered like this,” said Kamaljit Kaur, a senior citizen, who had to wait for around an hour on the road to board a bus to Mukerian.

Another passenger, Shweta, who had to travel to Bilaspur in Himachal Pradesh, said, “I wasn’t aware about the strike today. Even after waiting for two hours outside the bus stand, I couldn’t get any bus. It was a nightmarish experience”.

Like Shweta, there were many passengers who either missed their bus or had no idea where to board the bus. The buses were stopping anywhere on the road, there were no cops deployed to manage the traffic situation. “The scene outside the bus stand today was no less than a vegetable market. All the passengers were standing outside, buses were parked here and there, it took me 20 minutes to cross the road,” said Manmeet, a commuter.