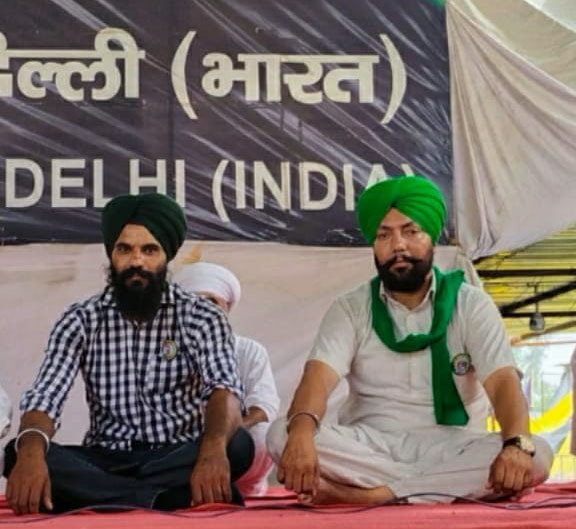 Manjit Rai (right), president, BKU (Doaba), and Davinder Singh, vice-president of the union, are the leading face of the movement.

Farmers have been sacrificing everything since November last year. Almost a year has passed, they are unmoved, determined and still fighting for their rights. The fight was started against the three farm laws, and now the movement has become huge with the farmers still at Delhi borders and also marking their presence in other states before elections and making people understand anti-people policies by the Central Government. But behind the massive movement, numerous speeches, strong protests, there are stories of struggle, and many personal lives getting affected.

The farmers also supported the Karnal morcha and remained there for weeks.

Manjit Rai, president, Bhartiya Kisan Union (Doaba), is the leading face of the movement. He can be seen in every major meeting, giving interviews to news channels, strategising the next plan, etc. But Rai, who hails from Hoshiarpur, owns land which is being looked after by his 21-year-old son, who is doing graduation and these days as his father is on the ‘battlefield’, the son is trying to look after the fields, though it is not easy for him. While Rai is busy making strategies, his own fields are being ignored by him.

Same is the story of Davinder Singh, vice-president, BKU Doaba, whose brother is taking care of the fields while the former is away. Singh said his brother had never done this work, but circumstances changed everything.

“Main apne brother nu keha y ate tu morcha sambhal lai, te main khet sambhal lena, ya main ladayi jaari rakhda. Of Course, it is not easy for him to look after everything, but what to do. He alone cannot do everything. We are suffering losses back here. But now this fight has reached another level, we want to save our honour too, and we cannot just sit at our homes and do nothing. We will have to win now,” he said.

Months have passed, I have not slept peacefully. “Yesterday, I came back to my home, just slept a night, and then went back again to Delhi. As the unions had campaigned against the BJP during the Bengal elections, the same will be done in the run-up to upcoming Uttar Pradesh and Uttarakhand elections,” he said. The farmers said now the next stop was these states.