2nd round of talks with authorities also fail 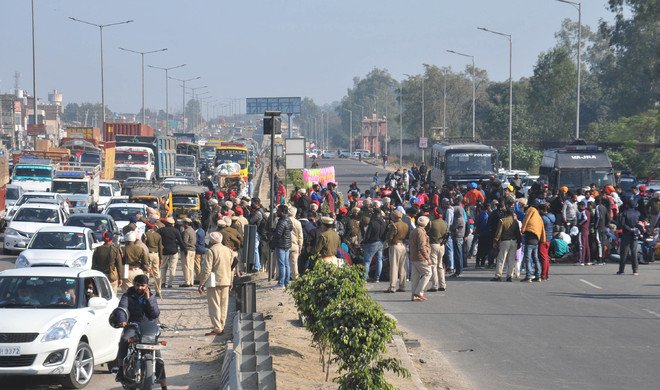 Nearly 40-odd aspirants for the post of constable with the Punjab Police from Jalandhar, Ludhiana, Amritsar and adjoining cities continued their dharna on the GT Road for the second day on Friday.

The protesters, who had yesterday blocked the BSF Chowk, chose to move to PAP flyover this morning. As the cops saw them trying to further create traffic chaos, they got into action. A huge police force was deployed to ensure that there was no blockade for the residents like Thursday. Water cannon-mounted vehicles, too, were pressed into service and they were finally convinced to move to a service lane along the PAP flyover.

The cops asked the Punjab Police aspirants to show their roll numbers and marks list or move off from the site. The cops managed to figure out some youth who were actually not candidates and were still trying to give the protest some strength and asked them to leave the site.

Meanwhile, a second round of talks was held in which ADGP-cum-Chairman of the Punjab Police Recruitment Board Gurpreet Deo talked to the disgruntled candidates. The students came out unconvinced and said they wanted an inquiry by a three-member committee of civil services officials into their allegations of anomalies in the recruitment.

They then met ADC Amarjit Bains, who assured them of taking their complaint to a higher level. After a meeting with the ADC, the aspirants said: “We have put off our protest for two days. We have given the administration some time to form a panel. If no panel is formed till Sunday, we will re-start our dharna again.”

On the issue, Deo said: “The entire recruitment is being held in the most transparent manner. We received 4 lakh applications for 4,383 posts of constable. We were to screen the top 20,000 applicants for which we set a new cut off. We only said the general category candidates scoring about 30 marks and SC candidates above 25 marks would be considered qualified. It was not our cut-off point. Our cut-off is different for different categories, which these students are taking as anomaly. I assure that there was no anomaly of any sort in the recruitment”.