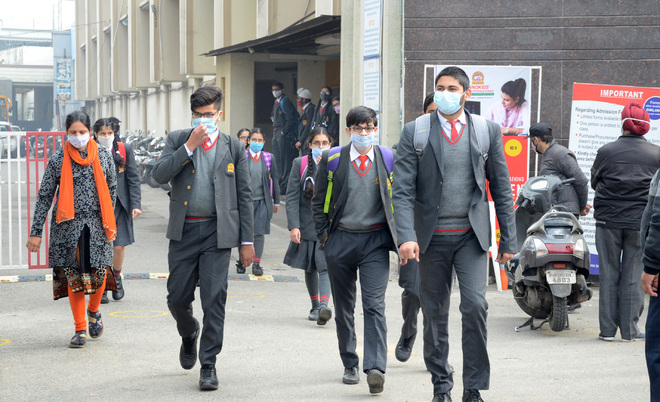 The attendance remained quite low on the first day and school authorities were in a fix and stated that blended teaching would have to be followed in such circumstances. Photo: Sarabjit Singh

After the state government issued the guidelines last week, some schools affiliated with the CBSE have also resumed classes. Since the attendance remained quite low, school authorities were in a fix and stated that blended teaching would have to be followed in such circumstances.

Around 20 per cent attendance was seen at Innocent Hearts School which reopened from Class V to XII on Friday. As the students came to the school after nine months, there was no morning assembly. Students went straight to their classrooms and attended classes for three hours (10 am to 1 pm). As transport facilities were not provided, parents dropped and picked up their wards.

Prerna Sharma, a mother, said, “My daughter is in Class VIII. Though I was little reluctant to send her to school, I allowed her as she insisted. She told me that only 10 students came in her class, but she enjoyed wearing the uniform and sitting on her bench. I am not sure if I will allow her to continue as the school will in any case hold online classes for the remaining 80 per cent students.”

Kanwaljit Singh Randhawa, Principal, MGN Public School, Adarsh Nagar, said, “We will start school for Class VI onwards from January 18. We are not calling Class V students as of now. Of the total 800 students in Classes VI to VIII, only 97 parents have given their consent. We have a meeting tomorrow and will plan on how to go about it as we will have to follow hybrid teaching.” He said, “We have already been running Classes for students of IX to XII. While for Class X, the attendance is usually 65 per cent, it is around 40 per cent for Class XII.”