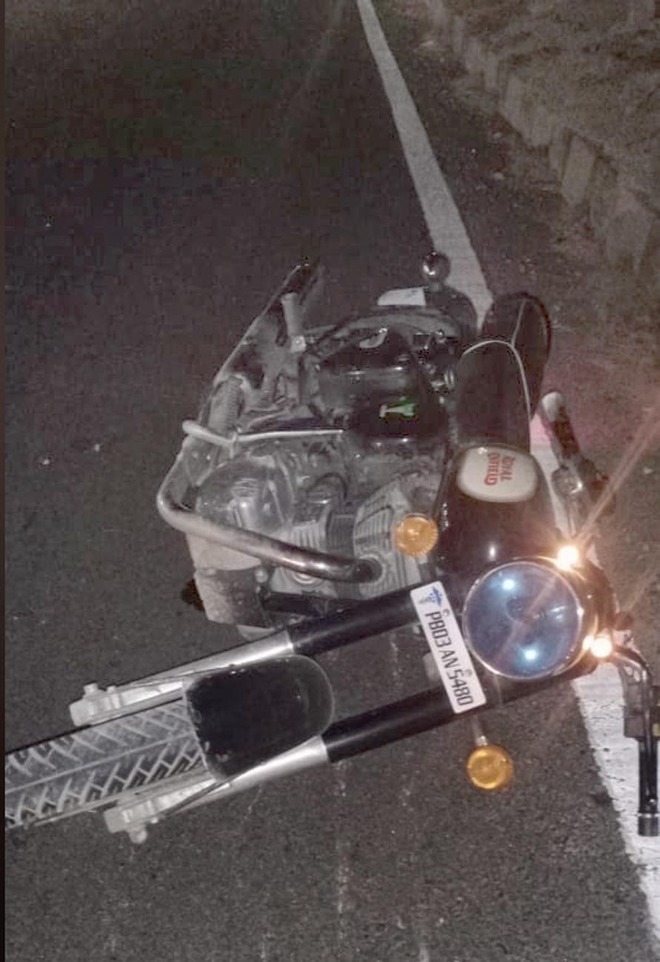 The ill-fated Bullet motorcycle that met with an accident on the Jalandhar-Phagwara road on Tuesday night. Tribune Photo

Celebrations turned into a tragedy for three MBBS students who lost their lives in a road mishap here.

Were studying at PIMS

The accident occurred place late on Tuesday night on the Jalandhar-Phagwara national highway when their bike got imbalanced and crashed into a divider.

The deceased, all in their early 20s, were reportedly going to Phagwara to celebrate the completion of their MBBS second year.

Their friends, who were also moving ahead of them on their vehicles, told the police that they had come out to celebrate after declaration of their results.

Their MBBS second year results were reportedly declared on the same day and they had scored good marks in the exams.

Area police station in charge Madan Singh said the accident occurred around 11.30 pm and when they reached the spot, the boys were lying in a pool of blood. As per investigation officer Rajwinder, apparently the tragedy occurred when the trio travelling on a motorcycle lost control over it and fell on the road. The bike was reportedly overspeeding due to which it broke into pieces and hit the divider. Sans helmets, the deceased sustained grievous injuries on their head.

With the help of passers-by and a PCR team, the students were rushed to a nearby private hospital, where Tejpal and Vaneet were declared brought dead. Later, Harkuldeep also succumbed to his injuries. Their bodies were sent to the local Civil Hospital for autopsy.