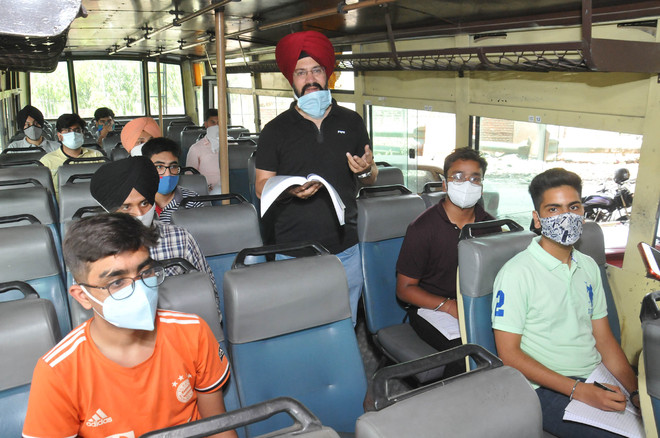 Prof MP Singh takes a class inside a bus parked near the bus stand in Jalandhar on Friday. Tribune Photo

Prof MP Singh, who runs a renowned coaching centre in the city and teaches chemistry to the Class XI and XII students, was today booked by the city police after he organised a coaching class for around 10 students in a bus near Jalandhar bus stand.

Prof Singh organised a doubt-clearing session for his students in the presence of the media as he said these students had been repeatedly calling him for doubt-clearing sessions of certain topics but he felt that the students were facing a setback academically by not attending regular classes. So, he decided to run classes for them in a bus for the next few days.

The chemistry teacher asked why were the coaching centres asked to suspend offline classes while the buses had been allowed to operate at 50 per cent capacity. He said he found a way out to teach his students in buses in an offline mode. “This way, I will be able to achieve my purpose as the children will have a better understanding of concepts. Also, since we will be legally correct in doing this, we will also not be defying any government orders,” he said.

But hours after his videos went viral, the professor was booked by the city police. Deputy Commissioner of Police Jagmohan Singh said, “The professor had committed violations under the Epidemic Diseases Act and Disaster Management Act and hence we have lodged an FIR against him at New Baradari Police Station. It was wrong on his part to call students and provide coaching, be it in a bus. We also checked videos and found that the professor was not wearing his mask properly, which again is a violation.”

Meanwhile, students who had come on the call of the professor maintained that they felt that they were able to understand concepts better through offline teaching rather than using gadgets from home. Some of them also complained that their internet services were not working properly.

Prof MP Singh had been in news a few days back as well when he sold vegetables in a cart, trying to mock the government for making teachers like him lose their bread and butter. “What else can we do to feed our families? I believe selling vegetables is a more profitable business these days,” he said, while posting his video on Facebook.