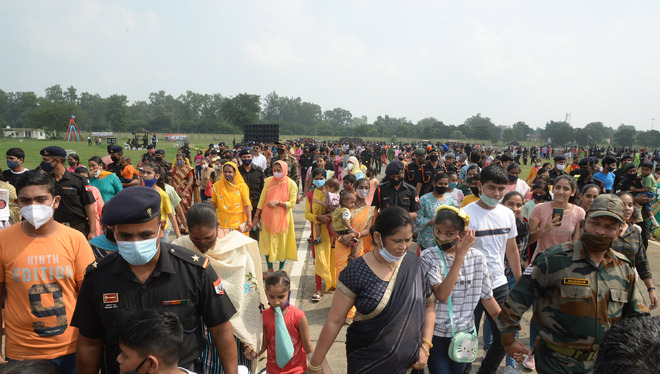 Visitors return dejected as the show cancelled due to bad weather in Jalandhar Cant on Saturday. Photo: Malkiat Singh

Over 2,000 visitors, including civilians, Army personnel and their families and mediapersons, were disappointed as the much-awaited air show by the Suryakiran Aerobatics Team (SKAT) scheduled for this morning was cancelled due to sudden cloudy weather.

The SKAT had been practising for the event for the past three days in the district and the residents were excited about the show, which was to be viewed best from Katoch Stadium at Jalandhar Cantonment, where seating arrangements were made. A large number of students from Sainik School, Kapurthala, Army Public Schools, various Kendriya Vidyalayas, Lovely Professional University, ASHA School and other schools of Jalandhar, Ludhiana and Kapurthala had also come to watch the aerobatic display by the jets.

Lieutenant General C Bansi Ponnappa, General Officer Commanding, Vajra Corps, who was the chief guest, and other senior military officers were also seated in the spectator gallery. The nine Hawk Mk 132 aircrafts took off from the Adampur IAF base at 9.20 am and flew over the cantonment. The pilots performed just one aerobatic loop and thereafter were nowhere to be seen. This loop too was not very clear because of the clouds.

Sqn Ldr Deepanker Garg, a SKAT pilot, shared that since the sky was overcast all of a sudden, it could be dangerous for the lives of the pilots. “We fly in a gap of 5 metres and any error due to low visibility can be fatal. We could not even postpone the show as we have other events lined up and the entire schedule gets disrupted.”

The event was a part of the Swarnim Vijay Varsh that marks the 50th anniversary of the 1971 war. The event was actually a two-day show with the families from the Adampur Air Force base were invited on Friday. Today, the families of Army personnel, mediapersons and some civilians were the main invitees.

At the venue, various fighter planes, helicopters and army equipments were also displayed. Youth and children showed inquisitiveness as they quizzed the IAF and Army personnel about the functioning of these equipments. A bus with an aircraft simulator remained the main attraction for the children.