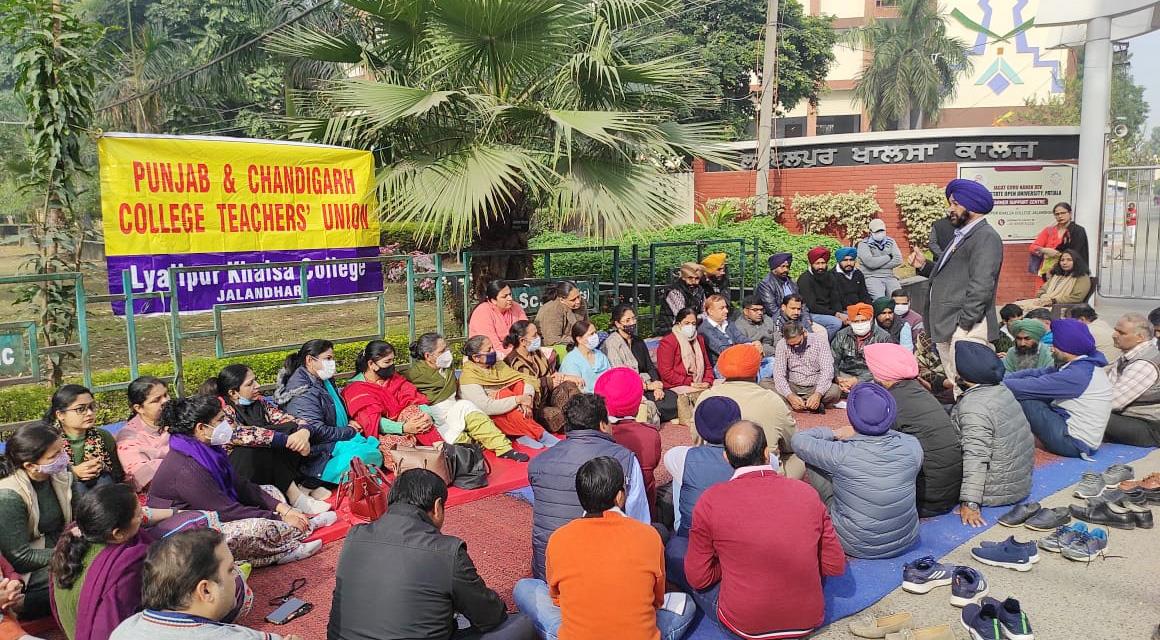 Teachers of 17 colleges in Jalandhar today remained on strike as they sought implementation of the Seventh Pay Commission in the state. In solidarity with statewide strike of PFUCTO (Punjab Federation of University and College Teachers Organisation), teachers, and professors struck work in 17 colleges of Jalandhar. They held dharnas outside their respective college gates and declared that the dharna would go for an indefinite period until their demands were met.

Teachers of the DAV College, HM College, Lyallpur Khalsa College, Jalandhar held a dharna outside their colleges for hours here today in protest against the delay in implementing the Seventh Pay Commission and the delinking of new teachers with the pay grades of the UGC by the Punjab government.

Punjab and Chandigarh College Teachers Union General Secretary Prof SS Randhawa said the entire issue had been raised before the state Finance Minister, speaker and even the CM. But so far, they have received only assurances. Randhawa said the teachers’ meeting with the high education secretary also remained inconclusive. They said the officials were given directions but no one paid any heed. They said professor demand that state CM himself addressed the issue on a priority basis. They also warned the state government that due to the repeated ignorance of these demands, teachers had been forced to proceed on an indefinite strike. They said they had no other option but to suspend education. District President Dr Sanjeev Dhawan said they would continue with their protests. He said a delegation of teachers also met Education Minister Pargat Singh recently but no conclusion came out eventually.

Tejinder Singh Virli, State Executive Member PCCTU, said, “Since the principal associations are in solidarity with teachers on these issues, students were sent home by many principals in solidarity with the protests. The state government also passed the Security of Service Act in the Vidhan Sabha recently but the governor hasn’t signed it yet. This is a protest about teachers fight for their services and for their job security. The protests will go on until the demand of teachers is met.”