Community sanitary complex on highway a boon for commuters : The Tribune India

Community sanitary complex on highway a boon for commuters 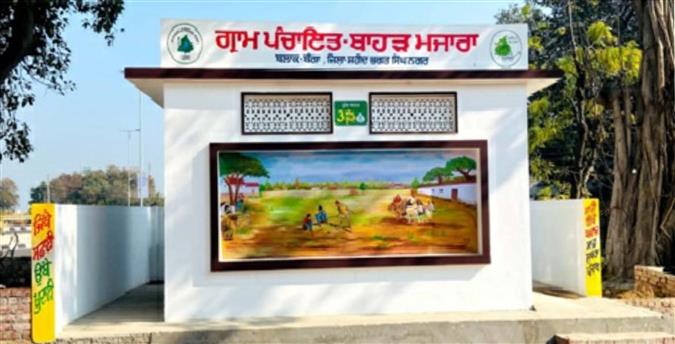 The Community Sanitary Complex in Nawanshahr.

Considering the woes of commuters at highway near Bahar Majra village for not finding sanitation facilities, the village sarpanch, Balbir Singh, had approached the district administration to resolve the problem. Acting upon the request of the panchayat, the Nawanshahr administration has constructed bathrooms by embellishing walls with different graphite.

The government allocated a grant of around Rs 3 lakh for constructing the facilities. Apart from this, Rs 5,000 was spent from panchayat funds for writing messages and beautification. The Community Sanitary Complex (CSC) is successfully functional now.

Under the campaign, the administration along with Bahar Majara gram panchayat is not only working painstakingly to sustain its open defecation free (ODF) status but also to add value to cleanliness of the village and serve the population who do not have access to basic sanitation needs further leading to open defecation.

Water Supply and Sanitation XEN Puneet Bhasin said that as per stipulations, a CSC should have separate facilities for men and women and consist of an appropriate number of toilet seats, bathing cubicles, hand washing platforms, wash basins, etc, and designed in a manner that was divyang-friendly with access to water and electricity. All the parameters were kept in mind while constructing the CSC and additional features were added to make it beautiful and sustainable.

Divulging the details, he further said that it consisted of four bathrooms—one each for divyang, women and two for men, respectively, having western toilets and Indian toilet seats in four marla areas. Each washroom constitutes facilities of toilet (Indian and western), taps, wash basin and exhaust for proper ventilation, soap stand, towel hanger with towel and dustbins. Other than bathrooms, two urinals for gents have been built separately at the rear and one hand wash basin in the front centre that is common for all.

Apart from this, electricity facility is also made available with installing 12 LED bulbs that saves power and also adds to the beauty of CSC and for comfort of users during evening and night time in the absence of natural light. He said the gram panchayat committee of four members had been formed to ensure its maintenance headed by sarpanch. The constructed CSC has helped all new households without toilets and passengers to access safe sanitation, helping the district to sustain their ODF status.

It is pertinent to mention that Bahar Majara has a population of 1,500 residing in 400 households situated in block Banga of district SBS Nagar. It was declared ODF in March, 2018 and 26 toilets were constructed under the Swachh Bharat Mission (Grameen) Phase-1.