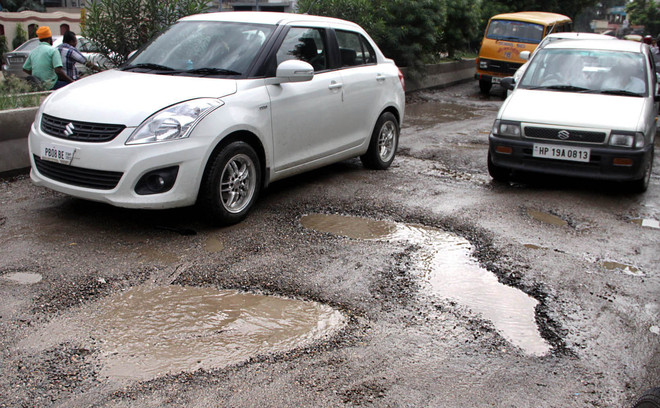 While the monsoon brought respite from the scorching heat, the uncovered potholes and damaged roads in the city exposed the grim picture of the city roads. The ride on these roads is nothing less than a nightmare for commuters who rued paying huge taxes to the government for development for no reason.

The poor quality concrete used to fill potholes and pits at several roads has come off. Waterlogging has made commuting on damaged roads a risky affair.

It has become difficult to travel on the 66-ft road filled with huge potholes and stones. The road also leads to the constituency of MLA Parghat Singh, despite that the authorities failed to repair the road.

Similarly, the service road on the Maqsudan Bypass to Sarb Multiplex or Pathankot Bypass Chowk stretch is crying for attention for the past several years. Due to the substandard quality concrete used in re-carpeting of the road, the problem stays the same every year. The nearby vendors claimed that even the sewage lies stagnant along the roads as the drainage system is defunct.

Apart from the vehicular rush, the stagnant water is another lurking danger. Many mishaps have taken place on roads in the past. Due to its vicinity to the industrial areas, it's majorly used by traders, Jalandhar-Ludhiana travellers, transporters and labourers who fear losing their balance on the uneven road.

Numerous potholes have made things worse. Aman Dhal, a local resident, even took to the social media, asking the MC authorities about when the condition of roads would improve in the city as they feared mishaps while commuting on the road. Residents call it a nightmarish experience to navigate these roads, especially during the night. The condition worsens on a rainy day as it becomes difficult for them to spot the potholes.

“Many times, vehicles get stuck on the battered roads. People riding two-wheelers have been grievously injured on these roads in the past. On a rainy day, rainwater gets accumulated for a long time. There is no use lodging a complaint with the MC as we know nothing would be done,” said Manmeet Singh, a transporter.

A commuter, Satnam Singh said, “The 66 ft road has not been repaired for the past several months. The condition of the stretch has worsened with the passage of time. If the government does not carry out development works on time, it has no right to collect development tax from us. “Rains have washed away the metalled layer of the road. Now, the stretch is riddled with potholes, loose gravel and soil. Dust flying due to the dilapidated condition of the road has further added to our woes.”